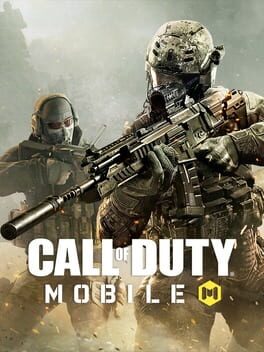 About Call of Duty: Mobile

In addition to Call of Duty: Mobile, the representatives of Shooter games also belong:

Call of Duty: Mobile is versatile and does not stand still, but it is never too late to start playing. The game, like many Shooter games has a full immersion in gaming. AllGame staff continues to play it.

Call of Duty: Mobile is perfect for playing alone or with friends.

At AllGame you can find reviews on Call of Duty: Mobile, gameplay videos, screenshots of the game and other Shooter representatives.

Author: Angelo Bianco
Date: 2021-02-01 18:18:44
The mobile market in the videogame field has already begun to entice software houses and publishers who in the past have shown themselves suspicious of this sector, then attracted by the possibility of entering a very profitable business. It is no coincidence that even a company like Nintendo, which has always been reluctant to bring its iconic mascots to platforms other than those belonging to the &quot;big N&quot;, has been convinced to review its position on the matter. Super Mario Run, Dr. Mario World and Mario Kart Tour are the aces that Nintendo has played on iOS and Android, not to mention that global phenomenon of Pokémon GO.

That is why it is not surprising that even the shooter par excellence, a blockbuster with a high-sounding name like Call of Duty , has thrown itself headlong into the sector, focusing on the now proven free-to-play system with the addition of microtransactions to payment.

Activision has entrusted its most important brand to TiMi Studios (development team belonging to the Chinese giant Tencent), and the 35 million downloads achieved by Call of Duty: Mobile (available from 1 October on iOS and Android) confirm the wealth of a sector capable of grinding staggering numbers and receipts.

Playing Call of Duty on a mobile device has a certain effect, especially for those who, like myself, have always waged war in the company of the series armed with controllers, on a screen much larger than a display a few inches wide, among the friendly walls of the house rather than outside its boundaries. More than anything else, it is strange to do it by pressing virtual keys on the touchscreen, especially if you are not so familiar with this kind of control system, but the immediacy rooted in the series soon manages to smooth even an approach so different from the classic one. In fact, after just half an hour it is possible to master the movement of the character and the related shooting phase in a much more natural way, not without some basic difficulties.

In terms of control method, you can choose a basic system of commands, with an automatic fire mode when the pointer crosses an enemy (both in autofire and aiming with precision) instead of performing the action manually and in a classic way: in my case I opted for the second with satisfactory results. On the one hand it is understandable the choice not to support peripherals such as controllers, thus nipping in the bud any differences and advantages between those who would have used them and not, on the other hand, players not very accustomed to the use of the touch control system may encounter many obstacles, especially when they quickly become cannon fodder in ranked matches.

Nothing has been left to chance and in any case, to meet what may be the different needs of the players, total freedom has been given to customize the arrangement of the virtual buttons, as well as being able to tinker with a whole series of settings that, if modified, they act both on the graphic / audio options and on the choice of predefined messages with which to give directions to your team. Don't be fooled by the mobile nature of this mobile transposition, because a convenient in-game chat has also been included to communicate with other players. Last but not least, you can dedicate yourself to creating a clan or join a pre-existing one, as well as being able to consult your personal statistics and take a look at the placement in the online leaderboards.

In just over 1 GB to download, a spin-off of the series devoted entirely to the multiplayer sector has been compressed, which takes up the essence of the traditional version, clearly with some substantial differences that come out due to the limitations smartphone and tablet hardware. It is as if a shrinking laser beam had hit and narrowed a canonical chapter of the series, while maintaining what are the peculiarities of Activision's shooter. There are evergreen modes such as Team Deathmatch and Domination or more tactical ones such as the timeless Search and Destroy, with the addition of ranked matches or those against bots to train in relative tranquility, all by making two teams of five players compete. .

By combining the universe of Modern Warfare with that of Black Ops , the development team has had the opportunity to draw from a disproportionate amount of maps, limiting itself to inserting only nine, all reproduced impeccably. As a player and enthusiast of the series I could define the maps present as a sort of "best of" of the PvP arenas that have alternated over the years, with others that will surely be added later if we consider that the material, on balance, is already beautiful that's ready. If nothing else, the players of the first hour will have the opportunity to get to know an important part of the brand while the veterans will be able to bring their experience to bear by moving with a certain ease among the puppets of Nuketown or in the wooden buildings of Firing Range. Too bad, however, for the absence of original content, mainly maps, which would have given way to battle on scenarios to be discovered and thus break the monotony of those who, on those scenarios, have already spent hundreds and hundreds of hours.

The polygonal composition of the maps, as well as those other elements on the screen, is still good but at the same time the details seem blurry and careless, a questionable but still predictable feature. Even using a 4G mobile connection, the fluidity of online matches is truly optimal and lag-free, while the game engine is able to maintain 60 fps in most situations. Some small signs of letting up come out when it comes to the battle royale mode, due to the size of the playing area and the number of players (well 100) who take part in it. For the rest it is the usual Call of Duty with killstreak, weapons to be customized (also aesthetically, because even the eye still wants its part) with a good amount of accessories including sights, silencers and various handles, perk to choose and loadout to create from scratch.

Excluding the battle royale mode from a game like Call of Duty Mobile would have been counterproductive, however never as in this mode there is a lack of controller support. The automatisms in the collection of equipment (only those useful for their own equipment) help and not a little to speed up operations that, otherwise, would have required precious seconds, but the impression is that the mode would have made the best with a controller. If you are familiar with Call of Duty: Black Ops 4's Blackout mode , then you will end up with a variant adapted for mobile devices, being able to switch between third-person and subjective views at any time if necessary, and using vehicles to move easily from one part of the map to another.

Microtransactions chapter. Notwithstanding that by playing it is possible to unlock weapons with related accessories, perks, grenades and special abilities, the microtransactions concern both the purchase of cosmetic items (such as emotes and skins) and weapons and special boosts that increase the levels of these. This is done by spending real money in exchange for CoD points (which can be purchased in packages with prices ranging from 1.09 to 109.99 euros), which do nothing but speed up the unlocking of some elements, with little impact on the general balance. at least for now.

However, there is a progression system that clearly rewards players who invest more time, with objects to be unlocked to get a respectable endowment in a few hours, even without resorting to in-app purchases, totally free. Do not miss the usual Battle Pass, present in both free and paid versions (which includes a greater number of rewards of greater value).

MODUS OPERANDI
I played Call of Duty: Mobile by downloading it for free from the Google Play Store on a Samsung Galaxy A40 smartphone with Android 9 OS. Thanks to the good specifications of the device I was able to set the graphics quality to "High", an option that guaranteed a good level and without any particular slowdowns. After completing the initial tutorial I took part in several online matches on each of the available modes and in all nine maps available in the game. To play, I mainly used the 4G data network, not experiencing any particular lag, except for the battle royale mode, which suffers a little from the size of the map and the greater number of players, without however "ruining" the gaming experience. I have not purchased CoD points (and I don't think I will in the future) because I was able to unlock everything I needed without having to resort to real money, a sign that microtransactions are not that invasive.

Screenshots will help you evaluate the graphics and gameplay of Call of Duty: Mobile. 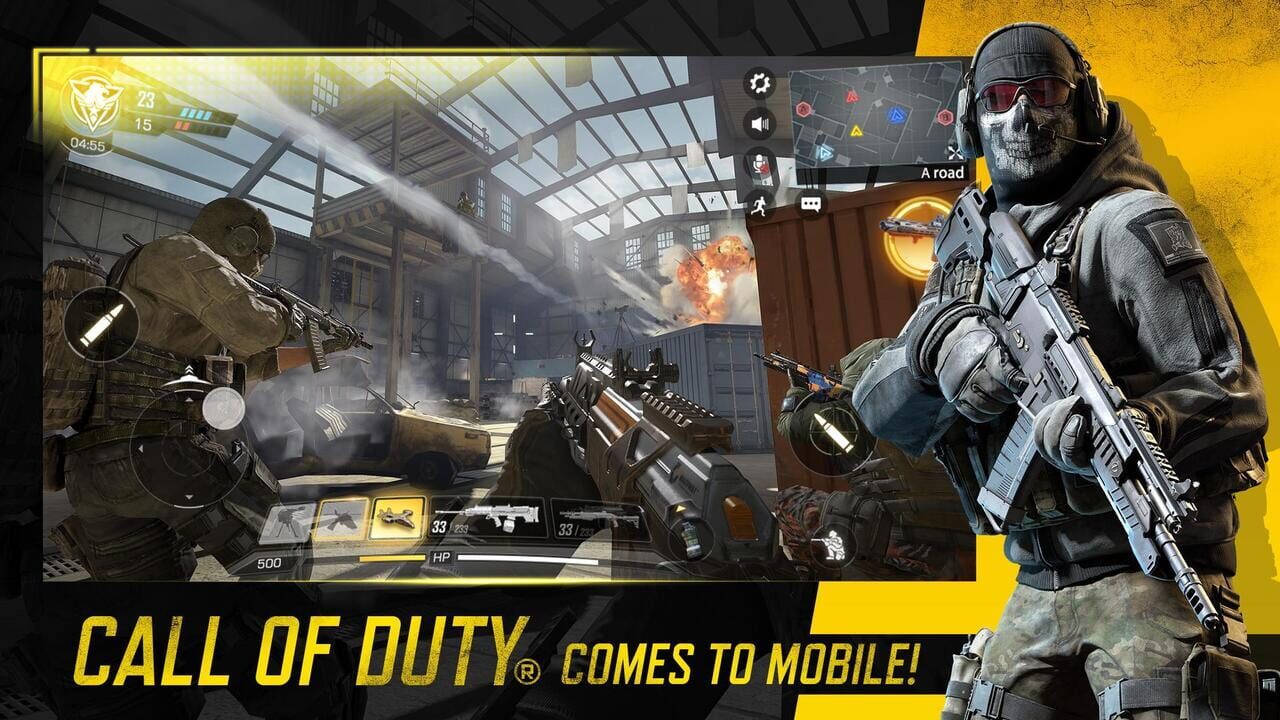 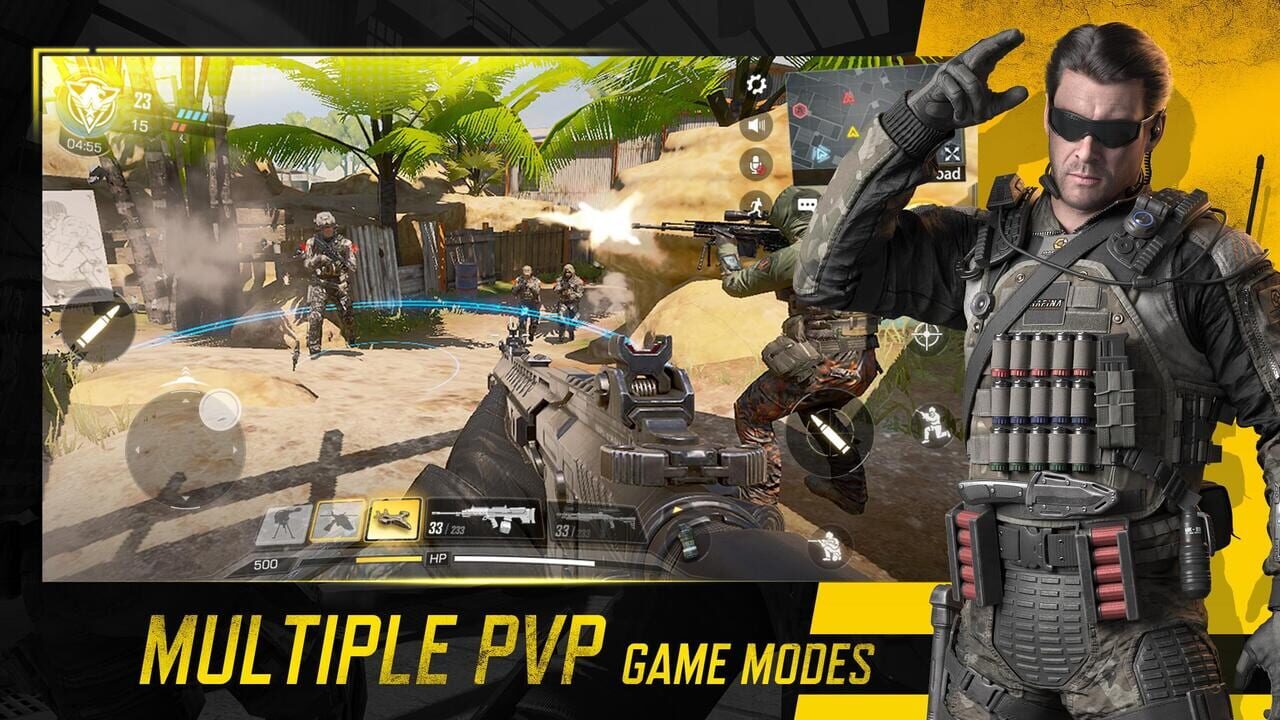 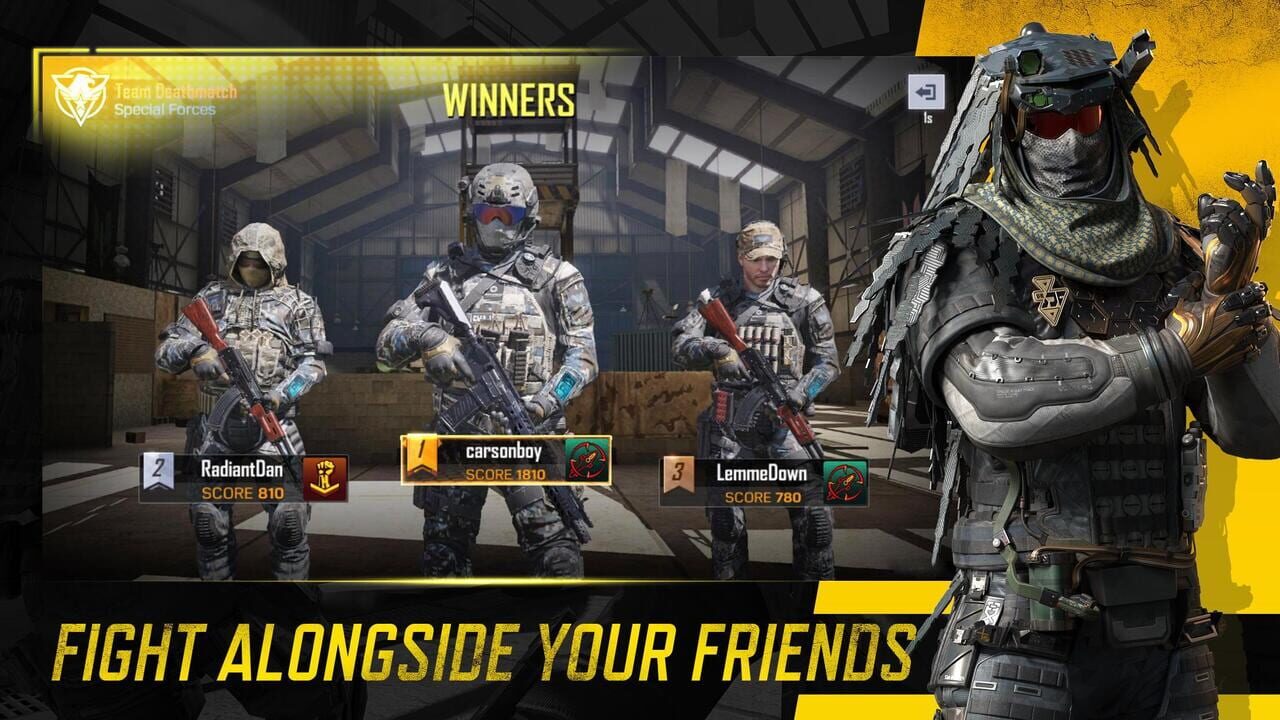 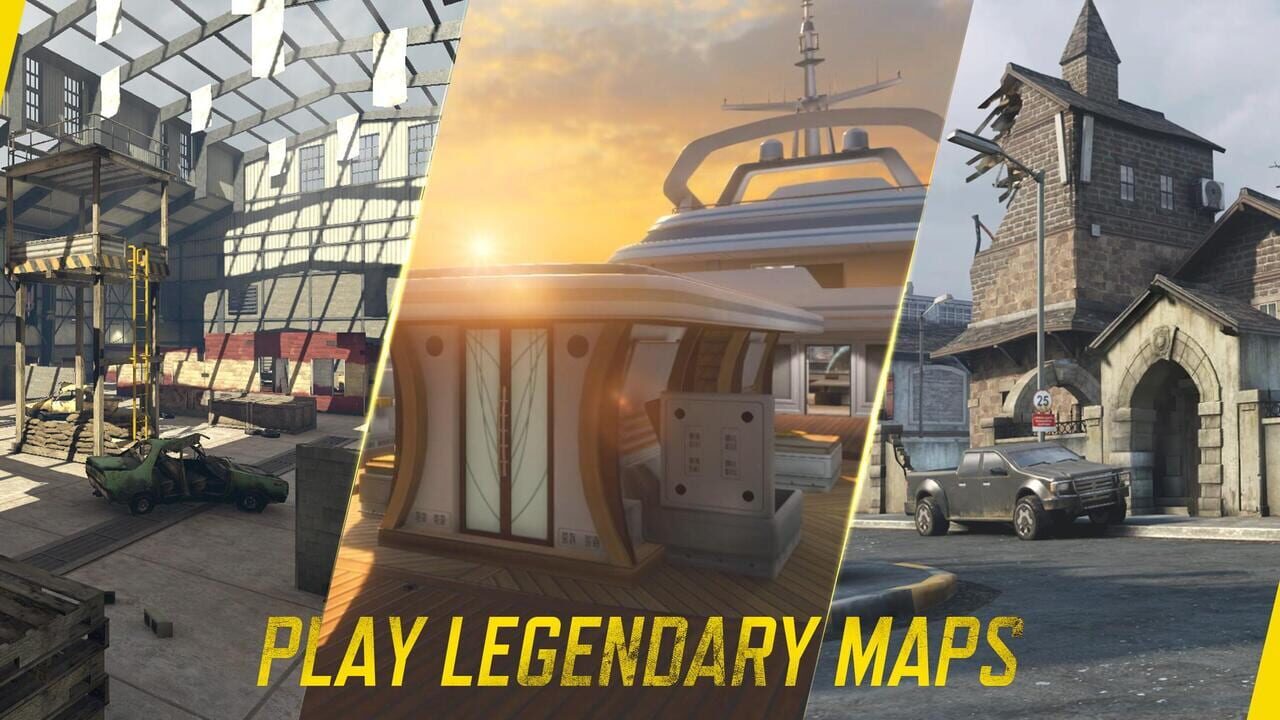 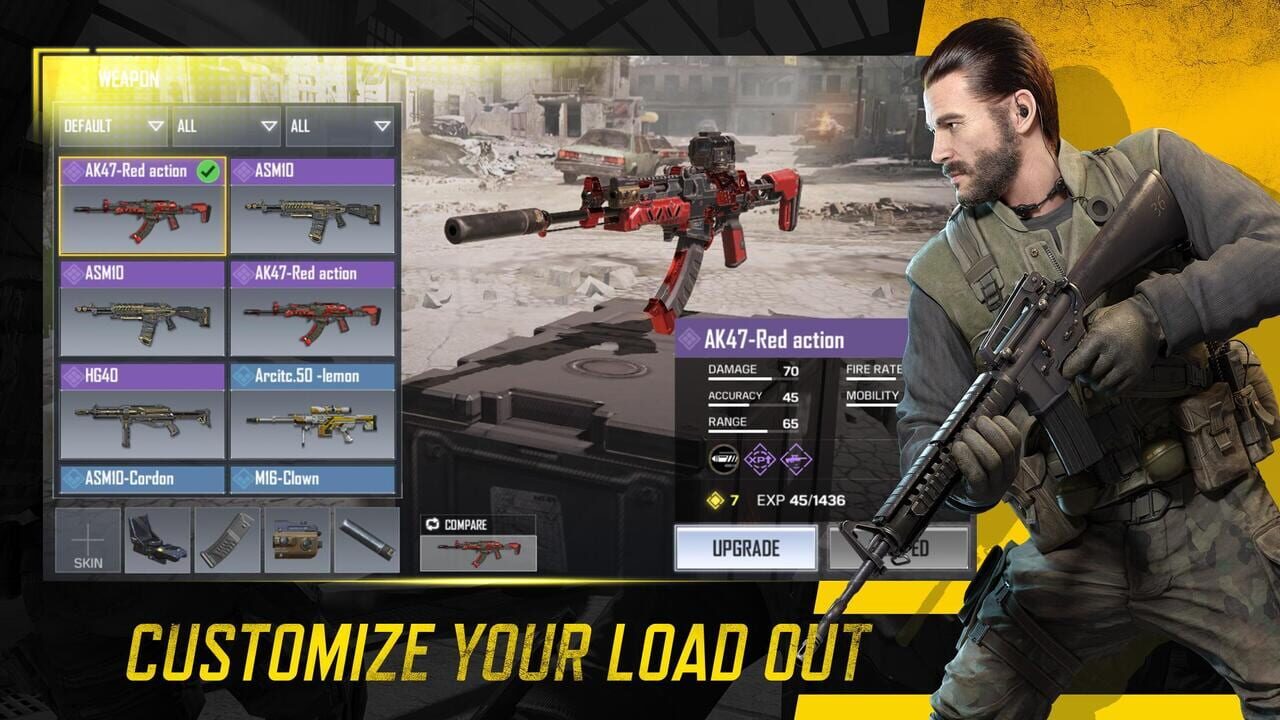 If screenshots are not enough, you can enjoy creative videos from Tencent Games

But that's not all! We also carefully prepared the best strips from Call of Duty: Mobile.

If you like Call of Duty: Mobile, but you're tired of it and want something new, you can try other games.