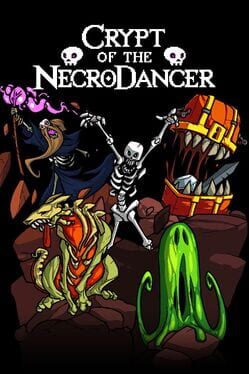 Crypt of the NecroDancer

Crypt of the Necrodancer is a roguelike rhythm RPG game. Move to the music and deliver beatdowns to the beat! Groove to the epic Danny Baranowsky soundtrack, or choose from five additional remixed soundtracks, including the new remixed chiptune soundtrack by Chipzel!

About Crypt of the NecroDancer

In addition to Crypt of the NecroDancer, the representatives of Role-playing (RPG) games also belong:

Crypt of the NecroDancer is versatile and does not stand still, but it is never too late to start playing. The game, like many Role-playing (RPG) games has a full immersion in gaming. AllGame staff continues to play it.

Crypt of the NecroDancer is perfect for playing alone or with friends.

At AllGame you can find reviews on Crypt of the NecroDancer, gameplay videos, screenshots of the game and other Role-playing (RPG) representatives.

Crypt of the Necrodancer - Análisis

Author: Albert Manjón
Date: 2020-07-30 22:37:57
In 1891 Karl Elsener began working on a tool for the Swiss army. He thought of including all the tools that would make life easier for soldiers in times of war. What if a blade that always comes in handy, what a screwdriver for soldiers&#39; rifles, what if a can opener for food in times of trenches. This multipurpose knife was renamed commonly and, as we know it today, the Swiss Army Knife.

And if, after more than 100 years, it continues to be manufactured and marketed, it is because its formula continues to work , right? And not so far from the Swiss Army knife are the formula of the roguelike and the reason for their success . Multifunctional games that move horizontally across different genres with superb subtlety and class. Brace Yourself Games has managed to mix in this Crypt of the NecroDancer genres such as dungeon crawler adventure, RPG, crafting and, as a hallmark, the musical. It brings it to us in a version for iOS devices that will be the best ally for any moment of free time we have.

In Crypt of the NecroDancer, we put ourselves in the shoes of Cadence , a young woman who, after an accident, is trapped in the crypt and loses her heart to a cruel creature. But who needs the heartbeat having the beat of the music?

Our movements, our attacks, our strategy, all our actions must follow the beat of the melody of each phase . So will the enemies. Each with a different attack pattern. While the skeleton raises its arms announcing that on the next beat it will sneak attack, the dragons have to be carefully flanked to avoid its frontal attacks . The cast of enemies is different as we progress phase by phase as well as their patterns , so learning is constant, both against common enemies, as against the mini bosses that we find at each level, or against bosses as pole-minded as the King Konga or Death Metal right before the end of each of the 4 zones currently available in the game.

And if music is the gear that makes the wheel turn, it could only be left in the hands of a sure bet like Danny Baranowsky . The one from Arizona already has us used to soundtracks of the quality of Super Meat Boy , The Binding of Isaac or Canabalt . Catchy music and frenzied beats that will remain in the air even after you stop playing and return to our mundane chores.

Crypt of the NecroDancer meets the more classic definition of roguelike but presents a much more benevolent approach towards us . It is true that each death will mean a return to the lobby and it will be time to start from the first phase, but firstly, once each area has been overcome, we will be able to access it directly and, secondly, a large part of the improvements that we will achieve through the diamonds that we find in the different areas. Phases will be about permanent improvements . We will be able to access better weapons permanently, better defenses, more life or better spells, for example.

But let us not fall into the error of thinking that in his benevolence there is mercy, or that behind his pixel art style there is an unfortunate simplicity . Crypt of the NecroDancer is trial and error . It is to put a foot in the door of a new area and know that if we pass the first level alive the first time we will have to go out that night to celebrate it. It is learning to immerse yourself in their peculiarities , to become familiar with the different weapons and to know if we develop better with the whip, the spear or the broadsword. It is knowing whether we move better in patience waiting for the exact moment or in the recklessness of a direct attack to the rhythm of metal guitars. It is to analyze the best way to approach a room or if the best option is to create our own using a pick and shovel .

As we advance we will find different playable characters , all of them with their playable quirks like Eli and his infinite bombs. Although the script is prepared for the young Cadence, a very interesting character will be the Bardo, with whom we can go into the dungeons in training mode without having to respect the rhythm in order to learn the patterns of the enemies or just have fun.

What differences do we have between this version of iOS and those of previous platforms? Ryan Clark and company along with Blitworks , managers of the port, have not been all these months looking at their navel. Among the improvements include the ability to dance to the sound of our own iTunes library, very interesting for all those with local music although integration with any platform streaming type Spotify would have had more sense today.

The control has also been adapted to touch devices. Being a game where setting the rhythm is the basis, this aspect was key, and despite the 3 different configurations, the control was not just 100% perfect . The digital pad and the split screen are unreliable, while in the case of scrolling, without being perfect, it is the one that responds best. The solution is to play with an MFi pad although, obviously, it loses much of the accessibility of the mobile device itself.

In addition, 4 new remixes of the OST have been included , which is still really sublime and one of the aspects so this game cannot be missed in our libraries.

But make no mistake, the adjustments and modifications in an adaptation for iOS always focus on improvements to the control or new content. However , this Crypt of the NecroDancer Pocket Edition goes further by simple nature . It meets one by one all the requirements that a game for mobile devices needs. Short games, frenzy, addiction, progressive difficulty. If you are one of those who have both versions you will have noticed. Playing Crypt of the NecroDancer is perfect for dead moments, sleepless nights or commuting on public transport. They are explosive flashes of beats scattered throughout our brains as our heads move to the beat of Danny Baranowsky's epic OST.

In the end it is summarized in a key point for its success, accessibility. The need for our total and absolute availability before a PC or the console . Having Crypt of the NecroDancer a click away from any application is what the game needed to adapt to the least available audience.

Crypt of the NecroDancer Pocket Edition is now available on the Apple AppStore for € 4.99 . Irresistible, go for it.

Screenshots will help you evaluate the graphics and gameplay of Crypt of the NecroDancer. 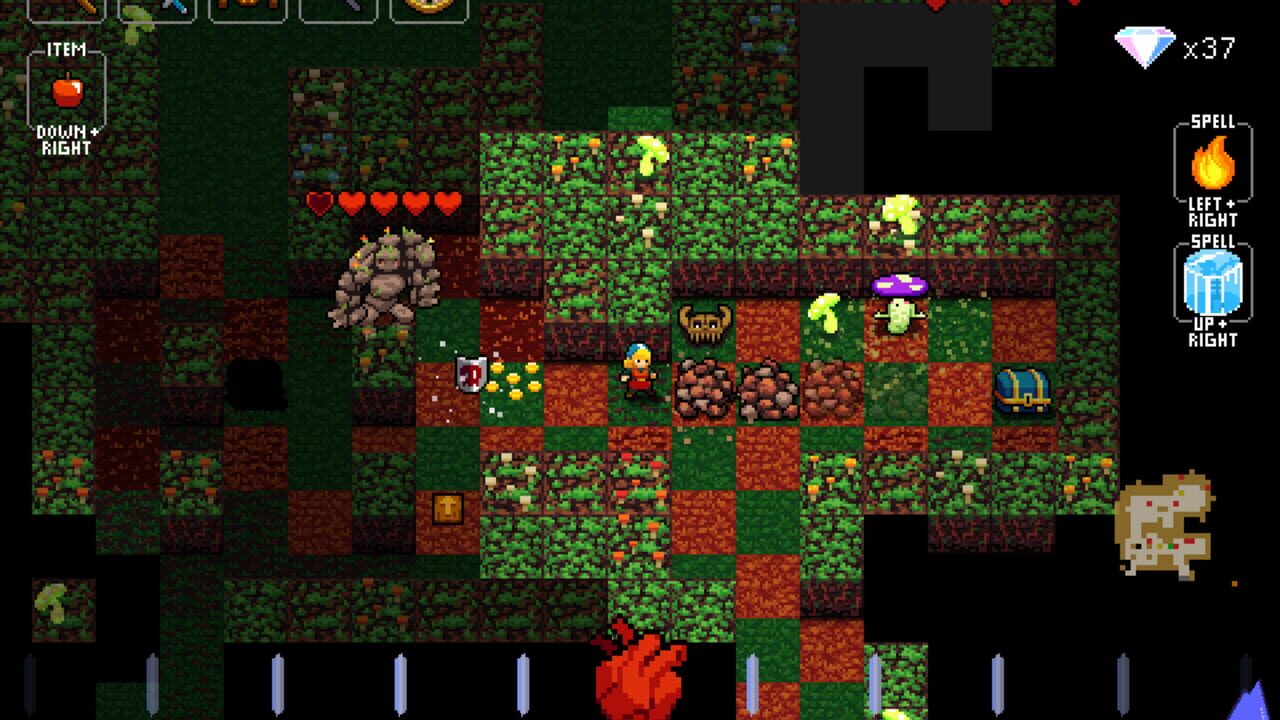 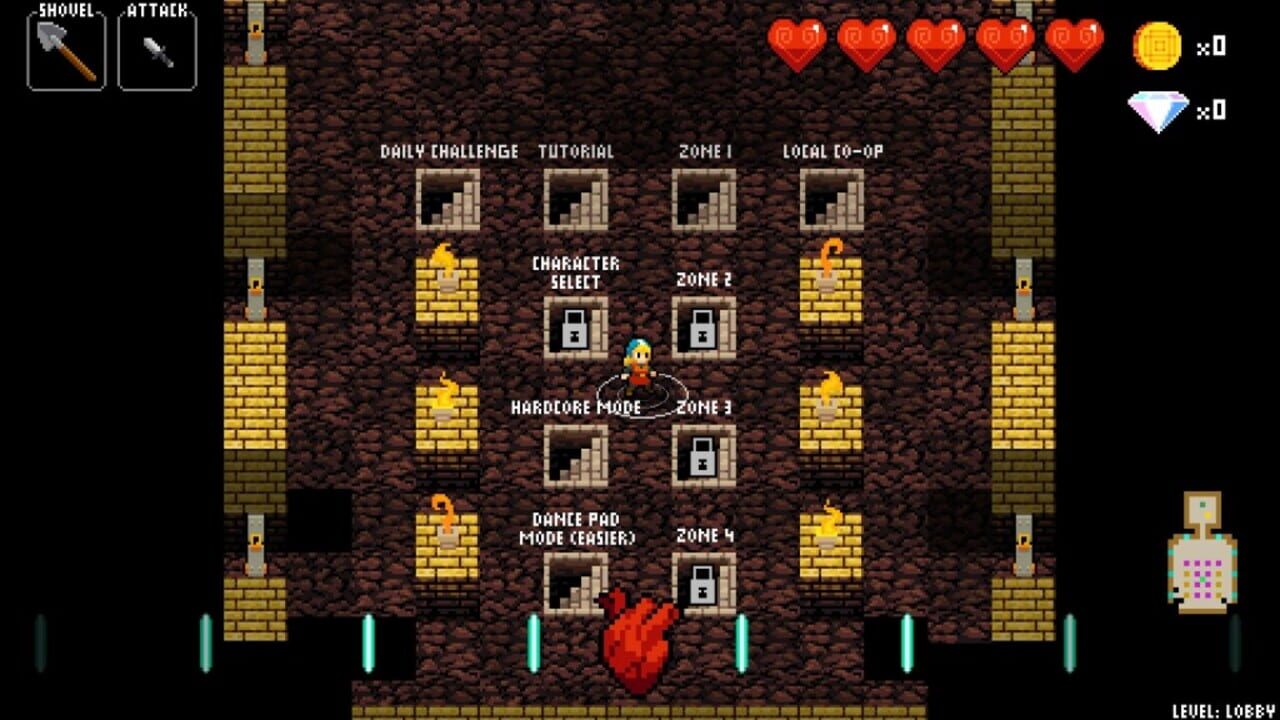 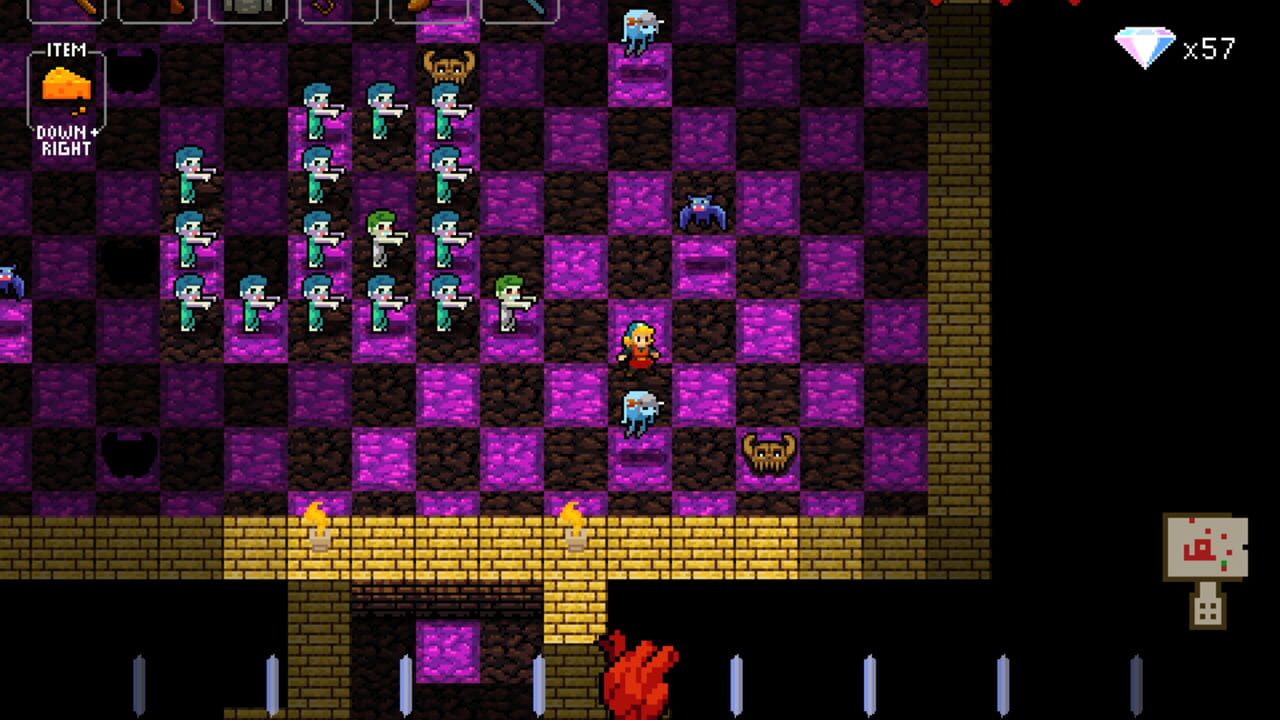 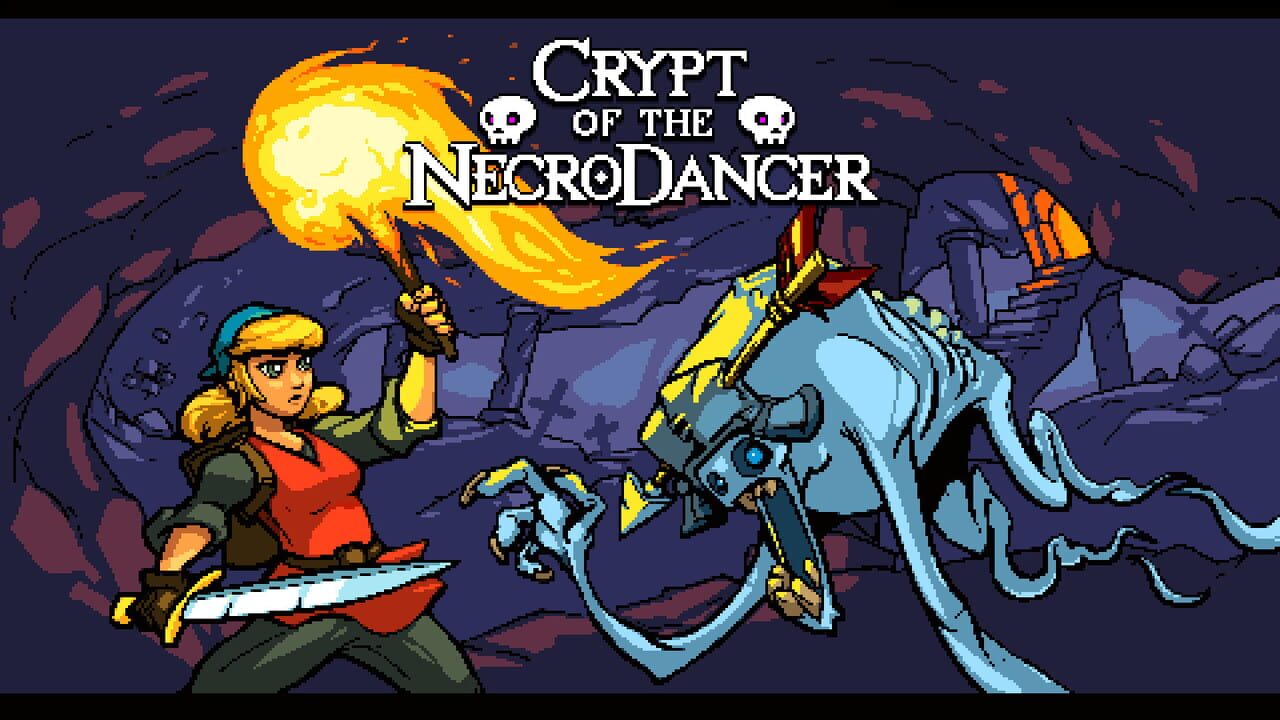 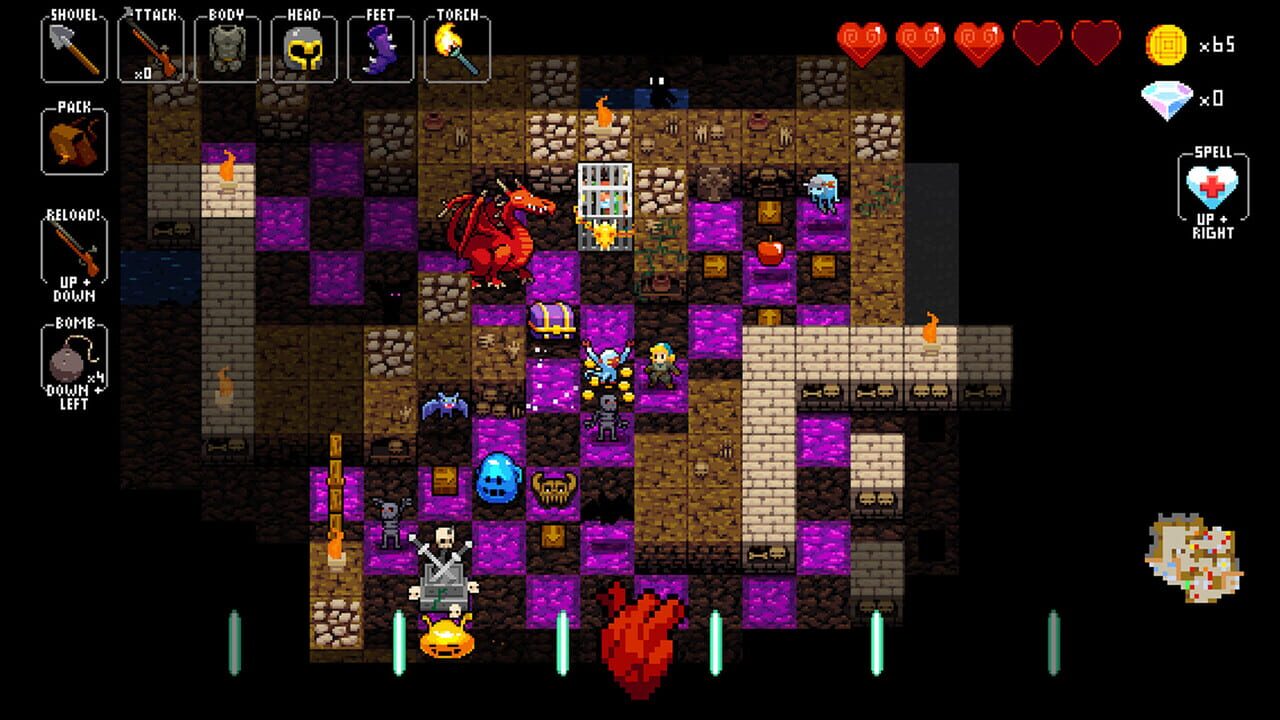 If screenshots are not enough, you can enjoy creative videos from Brace Yourself Games

But that's not all! We also carefully prepared the best strips from Crypt of the NecroDancer.

If you like Crypt of the NecroDancer, but you're tired of it and want something new, you can try other games.