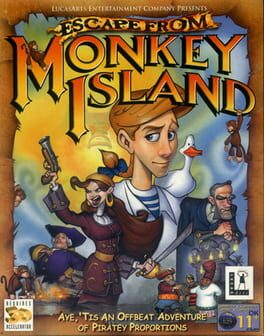 This is the fourth chapter of the Monkey Island series. As normal, prepare to find lots of salty humor and engaging game play from this legendary series. Loaded with lusciously rendered backgrounds and more monkeys than you can handle, Escape from Monkey features an original cinematic story full of drama. The game is highlighted by hundreds of challenging puzzles.

About Escape from Monkey Island

In addition to Escape from Monkey Island, the representatives of Adventure games also belong:

Escape from Monkey Island is versatile and does not stand still, but it is never too late to start playing. The game, like many Adventure games has a full immersion in gaming. AllGame staff continues to play it.

Escape from Monkey Island is perfect for playing alone or with friends.

At AllGame you can find reviews on Escape from Monkey Island, gameplay videos, screenshots of the game and other Adventure representatives.

At the sound of the name LucasArts, the heart of every adventure enthusiast trembles with joy ... The company, initially known as the George Lucas concern (as the Games division of Lucasfilm), is one of the precursors of modern adventure games, once providing hundreds of hours of fun to every Amiga user and ( back then still very poor) PC thanks to the absolutely cult game Maniac Mansion. After releasing a few more adventure games (including the famous Maniac Mansion by Zak McKracken), the company took a slightly different, much more commercial direction, while taking the more 'artistic' name LucasArts. The commercialization of LucasArts products was then based on the use of trademarks reserved by the Lucas empire, such as the characters of Indiana Jones, or the world and characters of Star Wars. Fortunately, despite the company's change of direction, it released fresh and even revolutionary games (such as the famous X-Wing, one of the precursors of the genre called space simulator, currently represented by such titles as Starlancer or Tachyon: The Fringe), and not she forgot about her first fans - adventure game geeks. For them, the company used the character of Indiana Jones (Indiana Jones and the Holy Grail and Indiana Jones and the Fate of Atlantis - the latter is the first graphic adventure game in which the action could follow one of three paths), but also decided to try to create a game not based on the original film. Secret of Monkey Island became this game, a wonderful adventure game set in the heyday of the era of piracy and privateering, in which the main fiddle is played by Guybrush Threepwood, probably the only man in the area who is not yet a pirate, but would love to be one. The success of Secret of Monkey Island, of course, resulted in the release of a continuation with the subtitle LeChuck's Revenge and the third part - Curse of Monkey Island. In the difficult situation of LucasArts, caused by (at least this is what it looks like ...) directing its products towards the younger part of players (the best example are games based on the very mediocre Episode One of Star Wars), the management decided to revive the Monkey Island series, to the delight of (but also fear - what will they do with our beloved game?) fans of the series.

The first mentions of Escape from Monkey Island appeared about a year ago and shocked fans of the original game as LucasArts announced that the program will be fully transferred to the third dimension. This step is quite crazy, especially for people who are not used to steering a character with cursors ... So at first, Escape from Monkey Island was written off. This situation continued until the demo version of the game was released, which fortunately alleviated the fears of most fans and made them long to wait for the release of the full version of Escape from Monkey Island. And here it is - continuation of the legend, realized in a very controversial "adventure man" way.

Can this method discourage anyone from playing? I will answer briefly - maybe. I, as a fan of not only the adventure genre, but also more dexterity forms of computer entertainment, had little problems with adapting to the new control system, and especially with getting used to the specific angularity of three-dimensional characters, especially since I could compare them to what I saw in Curse of Monkey Island (made in the convention of an animated film, pampered to the limit, by the way). At first, I was bothered by Guybrush's characteristic stutter in some locations, as well as frequent and confusing camera changes (whoever played Alone in the Dark or Resident Evil knows what I mean). The need to use only the keyboard is also very unpleasant - Guybrush can perform a given action only if the player leads him to an object or character at a sufficient distance. And this is definitely making the player's life difficult - why the mouse has not been implemented in this game (I emphasize), I have no idea. I hope that in the next part of Monkey Island (and one of the dialogues during the game continues), the authors will decide to restore the option of operating the entire game with a rodent ...

Another very, very annoying element is too many pseudological puzzles in the game. While the puzzles on the Insult Swordfighting level from the first part of the game were still poor to accept, in the fourth part their intensity and, above all, difficulty were definitely exaggerated. In the third act of the game we are forced to take part in very strange (and very complicated) fights with monkeys (sic!), Winning which we will need an old-fashioned piece of paper and a pen, thanks to which we will be able to write down our fighting tactics ... pages I have long missed a game that will require just writing down certain things on a piece of paper (such as writing down appropriate combinations of insults in Insult Swordfighting from the first part of the game, or, from another barrel, drawing maps in Eye of the Beholder). So for some players, fighting with monkeys may turn out to be a very tiring element, for me they were a nice break from coming up with solutions to logical puzzles included in the game.

And the level of these puzzles is really high, I would say the highest of all Monkey Island games. Although 90% of the solutions can be figured out by yourself, without the help of a walkthrough or hints from colleagues, unfortunately there are those 10% that simply cannot be solved without outside help (such as finding the fourth element of Governor Marley's inheritance on Melee Island) due to the great importance of the dexterity factor in chewing them. Exactly - dexterity. Thanks to the use of a non-mouse-assisted interface, the authors attempted a few unprecedented puzzles, in which, for example, you have to tap the appropriate key combination ... Fortunately, these puzzles do not interfere with the general perception of the game and are a nice diversion in intensive thinking, which the game forces ...

I wrote a few sentences earlier about the angularity of the graphics - this is the player's first impression. But the more we delve into the fascinating world of the Caribbean, the less this aspect of entertainment bothers us - I would even say that the three-dimensional graphics fit perfectly into the world of Monkey Island and work great in it! Driving Guybrush with the keyboard causes the problems I wrote about above, but on the other hand it allows for unprecedented situations and solving puzzles, such as solving the first puzzle we encounter in the game, when Guybrush is tied to the mast ...

The plot, fortunately, blurs all the unpleasant impressions caused by the game. Perfect coherence, interesting intrigue, and above all, numerous references to our times make the players discover the story planned by the authors with fascination and impatience. Although at the end the fantasy of the authors may disgust some of the more conservative players, in my opinion the monumental ending of Escape from Monkey Island fits perfectly into the convention set by the series (after all, in the second and third parts of the ending they were equally, if not more than in the fourth, weird. ..).

When it comes to the audio side of the title, LucasArts can have many reasons to be proud of it - one of them is the perfect refinement of iMuse, a system that adjusts music (not only in terms of volume, but also the drama of individual tracks) to the game situation. This system was first shown in the mentioned X-Wing, but only when listening and watching Escape from Monkey Island you can whisper one word with admiration - perfection ... The voices are also flawless, you can not hear any unexpected changes in the intonation of the voice suggesting breaks in recordings. You can see (or rather hear) that LucasArts, in terms of refining the sound, is trying to maintain its leading position in the computer games market. What's more - the company succeeds in this art ...

Overall, I have very mixed feelings about the fourth installment of the series. I am disgusted with the lack of mouse support and the angular graphics and arcade inserts annoy me, but you can't tear yourself away from this game. Please take it not only as a recommendation for this excellent title, but also as a warning ... This game is addictive, and very ...

Screenshots will help you evaluate the graphics and gameplay of Escape from Monkey Island. 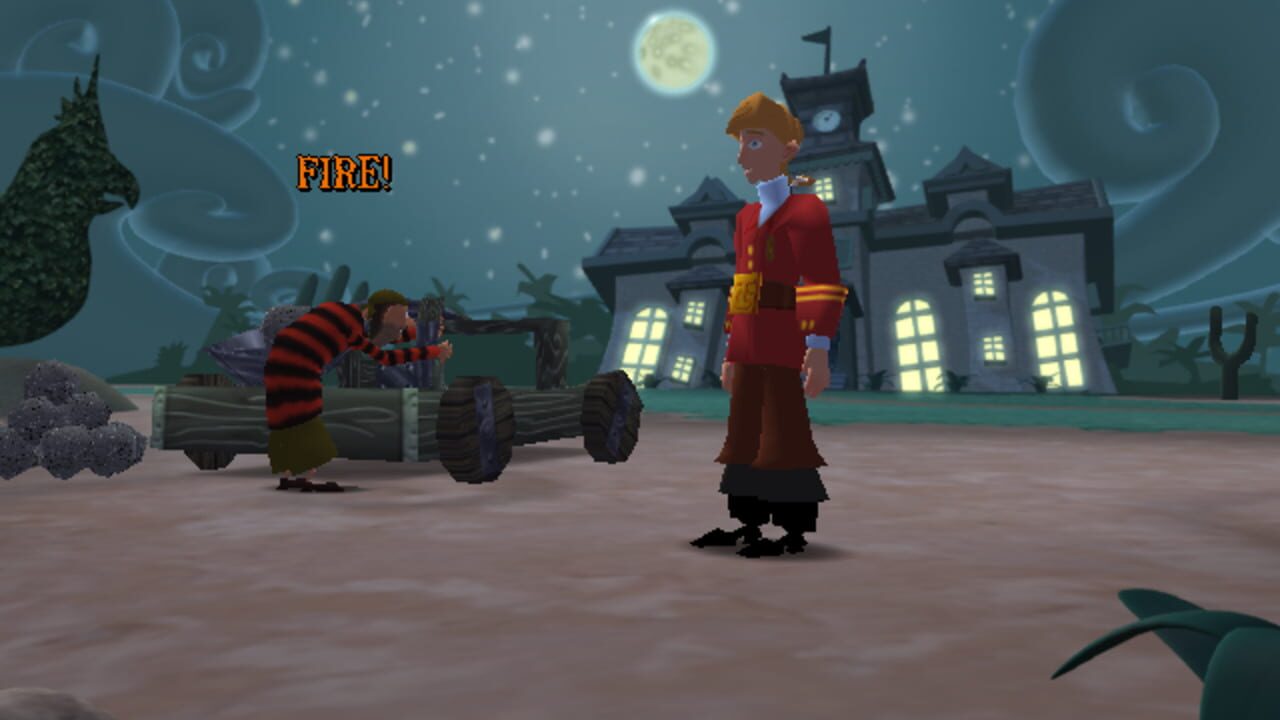 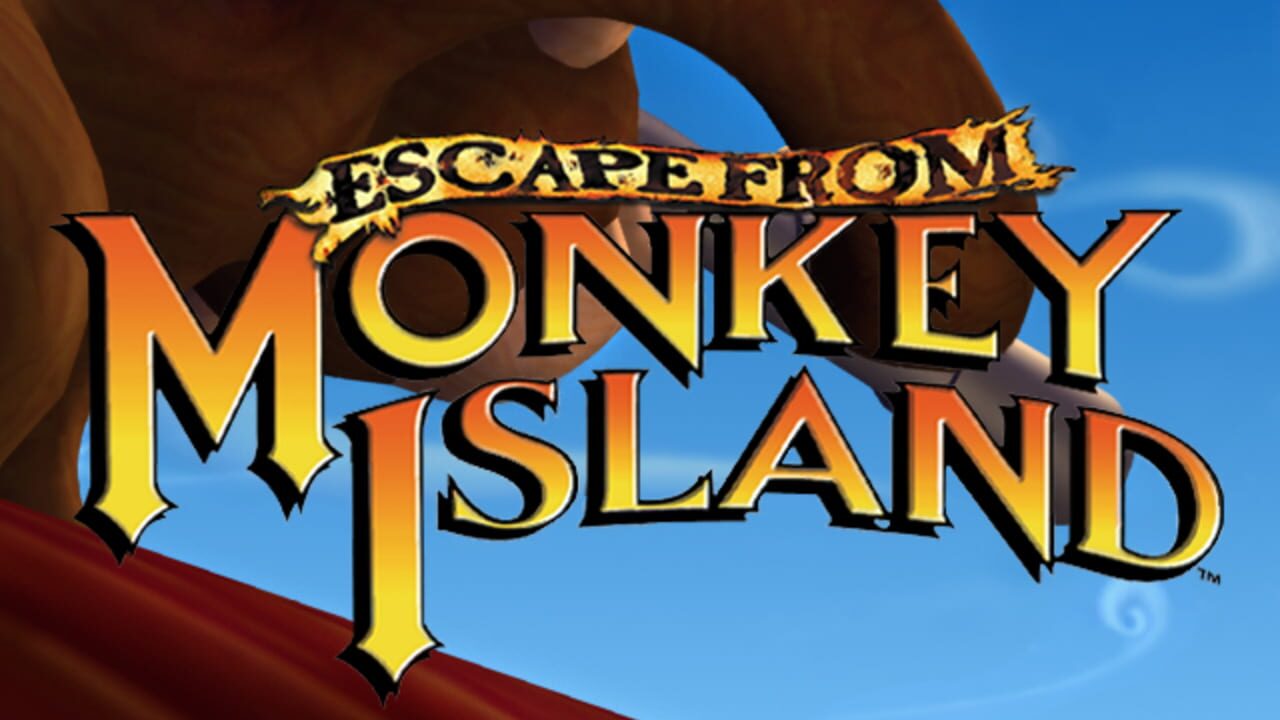 If you like Escape from Monkey Island, but you're tired of it and want something new, you can try other games.