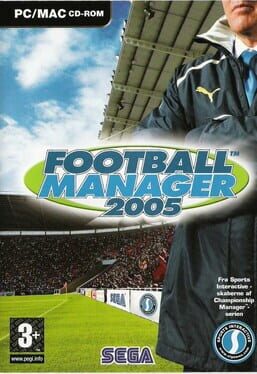 Football Manager 2005 is a game in the Football Manager computer game series. It was developed by Sports Interactive and released on November 5, 2004, published by Sega. On the 12th February 2004, after splitting from publishers Eidos Interactive it was announced that Sports Interactive, producers of the Championship Manager game, had acquired the brand and would henceforth release their games under the "Football Manager" name, whilst the Championship Manager series will go on, but no longer be related to Sports Interactive. Commonly known as "FM 2005", it competed directly with Championship Manager 5 the severely delayed, and widely slated effort from Eidos-funded Beautiful Game Studios. Football Manager 2005 included an updated user interface, a refined game engine, updated database and competition rules, pre and post-match information, international player news, cup summary news, 2D clips from agents, coach reports on squads, job centre for non-playing positions, mutual contract termination, enhanced player loan options, manager "mind games" and various other features. Football Manager 2005 was released in the UK on November 4, 2004 - closely followed by releases in many other countries around the world - and it became the 5th fastest selling PC game of all time (according to Eurogamer). The Macintosh version of the game comes on the same dual format disk as the PC version, so its sales are also included.

In addition to Football Manager 2005, the representatives of Simulator games also belong:

Football Manager 2005 is versatile and does not stand still, but it is never too late to start playing. The game, like many Simulator games has a full immersion in gaming. AllGame staff continues to play it.

Football Manager 2005 is perfect for playing alone or with friends.

At AllGame you can find reviews on Football Manager 2005, gameplay videos, screenshots of the game and other Simulator representatives.

The CeeManiak community, in other words, the community of fans of the Championship Manager series, is a phenomenon. Thousands of players from all over the world (including Poland - let's not be afraid to say it - the domestic scene belongs to one of the more developed ones) of all ages (from 10- to 40-year-olds) are fascinated by the pile of tables, filled to the brim with alphanumeric strings. What is it all about? I don't know, but to be honest, I personally feel infected with this phenomenon as well. Let there be no ambiguity, I am not ashamed of it!

The fathers of this undoubted success, the thriving Sports Interactive programming studio and, in recent months, the British publishing consortium - Eidos Interactive, have been working together for many years to develop the power of the CM series. They succeeded, but nevertheless the paths of both companies diverged with the premiere of the last real Championship Manager , dated for the 2003-04 season. Officially, there were divergent visions about the future of the series, unofficially - also. The breakup of our common life ended quite unexpectedly. The ingenious programmers retained the rights to all databases, source codes of previous editions etc; publishers from the Islands - only the rights to the magical, by some indiscriminately revered name - Championship Manager . AI started working on Football Manager 2005 , the first part of the new saga, and Eidos started working on the fifth installment of the Championship from scratch.

The deprivation of the rights to the name forced the Sports Interactive team to significantly refresh the existing interface. Legal issues just did not keep the old look. Although the whole game differs significantly from previous editions of Championship Managers , at first glance (or rather after the first fifteen minutes of playing) you can feel the professional hand of the creators of the CM series. The main "menu" on the left has gone to the central part of the screen, and the aforementioned left part has been filled with a submenu (drop-down lists, action buttons, etc.) with sections such as training, tactics or finance. In my subjective opinion, this solution works very well, and the whole thing is easy to learn.

Let me make a little comment. You must know that Football Manager 2005 is an incredibly complex game. It would take an average person no less than a dozen or so full hours to delve into all the elements of the program (let alone describe them). Knowing that listing all the pluses of the product is impossible, I'll move on to a few sensitive screens of the game ...

First of all, the task set for the playing manager focuses only on leading the team in terms of purely football. This means that the finance tab is limited to an informative role, and the only possibility for the player to influence the club's budget is to make appropriate transfers or sign appropriate contracts. This is not new, because the situation is almost the same since the famous CM1.

The tactical and training section looks very nice. In the first one, we can choose from a dozen ready-made, standard settings, which, of course, can be freely modified at will. The possibilities in this matter are really large - it is up to the player whether the defense line is to be extended or withdrawn, or, for example, whether the players are to attack with the wings or in the center of the pitch. For a typical maniac, this means in practice many sleepless nights over picking their own formations, both away and those prepared for matches played at home (contrary to appearances, where we play the match has a big impact on the course of the match).

There are as many, or even more opportunities to influence the development of virtual players thanks to the training option. The technique development exercise helps the players to improve their ball receiving skills, passing accuracy and effective dribbling. Playing in a five-person squad in a small space develops the ability to cover, move around the pitch and review the situation (using football jargon, the player "reads" the game better), and also allows goalkeepers to practice reflexes and interventions in one-on-one situations. There are over twenty exercises of this type in total (including cross-country running, playing grandfather, strength and tactical training, shots, head games, fighting for the ball) - and each of them can be planned for individual days of the week (morning, afternoon and afternoon), there are tons of possible combinations in setting regimes.

The creators provided us with more than a nice novelty in the match preview. It is true that it is still a two-dimensional view, where the role of footballers is played by "dots", but when it comes to the quality of workmanship - it is very good. The mentioned innovation is an additional "Split Screen" option, which - as the name suggests - allows you to split the screen with the match preview into two parts. In other words, the player now has the ability to simultaneously observe, for example, the 2D mode and match statistics without unnecessary and annoying switching screens. For many it may seem strange, but for me it is a great solution and very, very helpful.

EA Sports's competitive Total Club Manager, moreover, for several editions already, is famous for a very interesting media option. The developers from SI Tower finally came to the conclusion that this element is very important, especially in terms of gameplay. In the new Football Manager, it was the topic of the media that received a lot of attention. The ability to comment on current and previous opponents, current events, etc. influences not only the variety of the game, but also the players themselves, their morale and motivation. What's more, if we maintain good relations with the boss of a given team, it will be easier to borrow or buy a player from this club. When deciding to speak in the press, it is worth biting your tongue twice and thinking about whether it will definitely benefit your club.

Despite the emergence of many new options, manufacturers have managed to optimize several algorithms. The effects are visible to the naked eye - the game is much more stable, and most importantly, faster than before. Comparing the situation to the last Championship on 03-04, you can see a clear improvement, for which the authors deserve a round of applause.

The power of Football Manager 2005 is undoubtedly made up of a huge database (it includes over two hundred and thirty-five thousand players and one hundred and forty competition classes from forty-three countries). Traditionally, its development is the responsibility of a multinational staff of reaserchers, i.e. people supplementing the base. Unfortunately, this time there are many doubts about their competence. For me, as a die-hard fan of the Polish league, the most noticeable ones are outdated or erroneous teams in Polish clubs. Examples? Here you are, Paweł Pęczak is still in the team of Górnik Zabrze, although in fact he has been with GKS Katowice for a year. Tomasz Frankowski, the top scorer of the Polish league at the halfway point of the tournament, is worth much more than the striker of the Capital Legia, Marek Saganowski, and even worse - he is clearly weaker than him. Doubts as to the skills of individual players are indeed many, even dangerously many.

Fortunately, soon (on Mikołajki - December 6), two well-known and liked Polish players will release an unofficial add-on updating the entire database. However, this does not change the fact that the basic version of the database is, to put it mildly, not the best quality.

Football Manager 2005 is a good game, and even a very good one. More than ten years of experience of Sports Interactive programmers in the work on the Championship Manager series, the old proven and modernized engine on which the whole was based, as well as a whole lot of options - these are the elements that speak for themselves. I have no doubts whatsoever. FM 2005 is a position worth recommending to every football and CM series fan. This is a position that can provide countless hours of frontal gameplay. Football Manager is a game that you just have to play!

If you like Football Manager 2005, but you're tired of it and want something new, you can try other games.