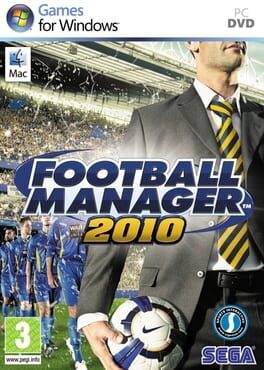 In addition to Football Manager 2010, the representatives of Simulator games also belong:

Football Manager 2010 is versatile and does not stand still, but it is never too late to start playing. The game, like many Simulator games has a full immersion in gaming. AllGame staff continues to play it.

Football Manager 2010 is perfect for playing alone or with friends.

At AllGame you can find reviews on Football Manager 2010, gameplay videos, screenshots of the game and other Simulator representatives.

Already on the occasion of dealing with the beta version, I found that Football Manager 2010 will be a great game. Better, polished and more engaging than last year's edition, which could not necessarily be considered a success. More targeted at a wider group of players, more open, with a refreshed look and new solutions tested in the world of Football Manager Live . And that's exactly how it is. It is a pity that one - the main - problem has not been eliminated: the stagnation of the series.

The first time you encounter the game, the new interface catches your eye. Icons and various buttons were abandoned, and a tab system was chosen, which works great here. The default skin makes a good impression, which is available in two color variants, white and black, probably in order to better adapt it to a specific time of the day. For many players starting out with the 2010 edition, the new interface can be difficult to navigate between screens. However, after dozens of hours spent with the new FM, everyone will get to the practice and will easily find any screen they will need at the moment. The game itself works a bit faster than before, which is reflected in even more efficient match simulation. Polonization has been done correctly once again. There are some untranslated texts here and there, but future patches will surely fix it.

The widely criticized 3D mode has also been changed a few times. About a hundred new player animations have been added, new weather effects, lighting has been improved, etc. However, no modifications will change the fact that this mode is actually unnecessary. It practically does not support the observation of players' behavior in any way, but only increases the waiting time for the match to start. His negative assessment is also affected by the fact that the game sometimes "cuts". Only turning off the fans helps to a certain extent. Fortunately, the good old 2D view is still available.

In the sphere of running the club, the goal was to increase interaction with the team's training staff. Now the coaches want to talk to us about the team immediately after coming to the club, point out the shortages in the squad or suggest what to change in tactics to play more effectively. They can also accurately discuss league opponents, indicating their strengths and weaknesses. In addition, before the match, the assistant can tell you which player or leg you should pay attention to, or how to guard him. Staff suggestions come out every month, there are many of them and they are very useful, especially when it comes to interesting players. Of course, the accuracy of coaches' advice is determined by their attributes, so they are not always reliable.

The rest of the team management elements have not received radical improvements. Training and scouting are practically the same as in the previous edition of the series. Conferences, despite adding a few new questions, are still boring and an assistant is constantly being sent out. As for transfers, it was possible to determine the length of the repayment of the player's installments for a maximum period of forty-eight months. There is a lot of traffic on the transfer market itself. Usually you don't have to spend a lot of money on an interesting footballer. There is also no madness with spending money by artificial intelligence, although it sometimes happens that a large club will buy a promising player for a large amount of money. However, there are still problems with selling players, even when we offer them to individual clubs for small sums.

Another innovation that (apart from the aforementioned staff hints) makes it easier for novices (and not only) to play, is a completely new tactical system. For many people who associate all incomprehensible sliders and check boxes with reading coffee grounds, this system will be a significant convenience. All known options have been reduced to the absolute minimum, while others, more suitable for the new system, have appeared. The tactic wizard, leading us through successive windows by the hand, allows you to create an effective formation and strategy in several dozen seconds. Each team can have a set philosophy and style of play. Other, more advanced options are also available. Additionally, each player can be assigned an appropriate role and task. This does not mean that the old system has been discontinued. It is still implemented in the game and is doing well. It is even possible to convert a tactic created with a new one. However, the question arises - which one is more effective? It seems that we can achieve more tangible results by using traditional tactics. The new system does not allow you to set certain nuances that can increase the chance of success.

Many improvements have been made to the match engine and artificial intelligence of virtual players. There is no revolution in this matter, although the progress is visible to the naked eye. The players play actions much better and change the ball more sensibly, according to the tactical tasks. They move wisely across the turf and look for good positions. To a lesser extent, we encounter pointless passes and defensive plays.

Compared to the mentioned beta version of the game, the unfortunate interventions of the goalkeepers have been improved. There are no more unheard of situations in the penalty area and the goalkeepers defend themselves much more confidently, which does not mean that they do not let go of some obvious rags. Another breach of the beta is long range shots being too frequent. As soon as there is a piece of free space, the competitor must shoot, there is nothing to stop him from doing so. The worst thing is that this error is not the first time in the series.

Another problem with the match engine is some strange factor that makes the attributes of our opponent's players grow depending on the situation on the pitch. The opposing team wins the game with one consistent action, while our players attack without a goal effect for ninety minutes? The opponent's goalkeeper pulls out amazing balls? This is the factor. This is not a bug, it is a pure cheat on the part of the game producer, which is probably (completely unnecessarily) supposed to add some emotions to the pitch. Such a situation does not happen in every game, but in the season there are even a dozen or so similar matches. The worst thing is that we have to deal with such a negative engine element once. I'm not denying that similar matches can happen, but not so often. It has little to do with realism on the pitch.

A new, interesting addition to the events taking place on the pitch is giving players simple commands during the games. These are easily accessible as they can be found on the match screen, so you don't need to open the Team Tactics screen. There are several dozen of these instructions, ranging from an order to increase the team's involvement in the offensive to a request to catch your breath. The effect of issuing them varies and depends mainly on the pitch situation. Some are more event fit, others less so. The commands can be combined in any way without any restrictions, regardless of the fact that they do not match. They are mostly effective in making the game a bit more creative at times.

The current situation of the Football Manager brand is somewhat reminiscent of past events. In 2001, Sports Interactive studio produced its best, most playable and polished product in history - Championship Manager 01/02. After its premiere, the company immediately started working on the next game in the series, with the intention of totally improving many elements. There were plans to create a completely new way of visualizing matches, i.e. a 2D mode, and to improve the old interface. There were constant problems with the game during production, which caused development delays. Unfortunately, pressures from the publisher prevented many fans from mentioning the premiere of Championship Manager # 4 very pleasantly. Numerous bugs in the match engine, gameplay and performance issues have led to a decline in confidence in the Sports Interactive team. Half a year later, the 03/04 edition was released, improved and improved in relation to the "four". It was the last AI game released by Eidos Interactive.

So where are the similarities? Well, I would compare CM 01/02 to the new FM 2010. Great, refined and above all - very playable position, absolute leader of the genre. It's just that I expect the developers to make a bold move, "overhaul" the series, even at the price of slipping the release dates. I want to feel like I did in 2003 when I was playing my first match in 2D mode and I was convinced that a new era of soccer management had arrived. I was right, as evidenced by the subsequent editions of the series. However, after six years since then, I only have the impression that for a long time we are still getting the same product, which supposedly evolves in the right direction, but still needs a real revolution in many fields.

Screenshots will help you evaluate the graphics and gameplay of Football Manager 2010. 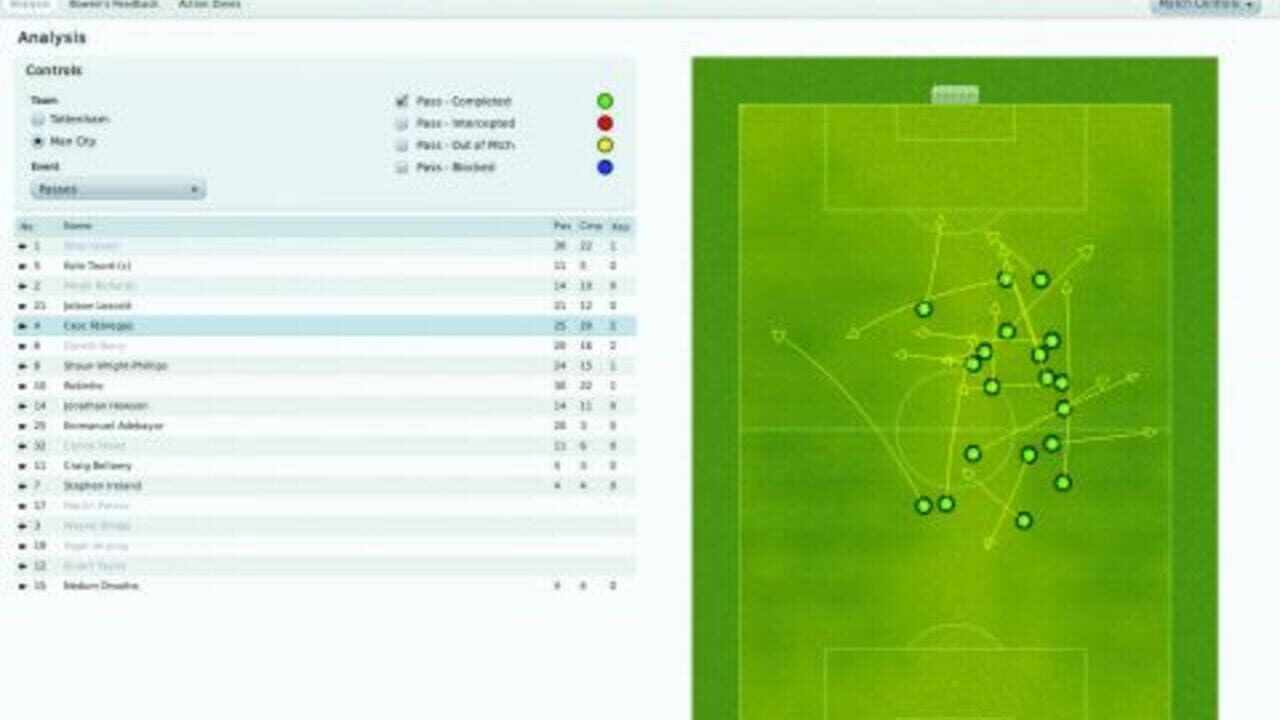 If you like Football Manager 2010, but you're tired of it and want something new, you can try other games.