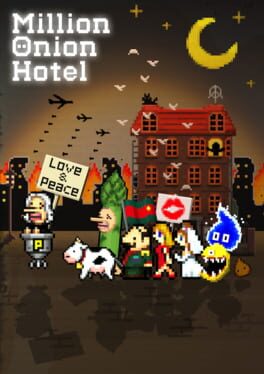 "Million Onion Hotel is an action puzzle packed with a lot of elements!! A mysterious world of crazy sound and unique pixel arts and animations!"

In addition to Million Onion Hotel, the representatives of games also belong:

Million Onion Hotel is versatile and does not stand still, but it is never too late to start playing. The game, like many games has a full immersion in gaming. AllGame staff continues to play it.

Million Onion Hotel is perfect for playing alone or with friends.

At AllGame you can find reviews on Million Onion Hotel, gameplay videos, screenshots of the game and other representatives.

A long, long time ago, there was a tiny country between that country over there and this country over here. In that country was a strange hotel. This hotel’s specialty was "magical onion soup". They say many famous and great people came to taste this soup, though apparently not one of them thought to describe the flavor to anyone else. Maybe it’s because the soup had a hidden power. Yes . . . a secret power. One night, some esteemed guests found themselves suddenly sucked into a far- off galaxy! Maybe that is because they . . . drank too much of the magical onion soup?

Screenshots will help you evaluate the graphics and gameplay of Million Onion Hotel.

If screenshots are not enough, you can enjoy creative videos from Onion Games