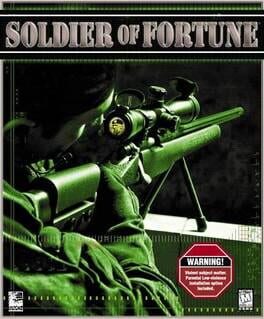 John Mullins, working for a U.S.-based mercenary ("soldier of fortune") organization known only as "The Shop", and his partner, Aaron "Hawk" Parsons, are assigned to prevent the nukes from falling into the wrong hands, and stop the terrorists in their plans.

About Soldier of Fortune

In addition to Soldier of Fortune, the representatives of Shooter games also belong:

Soldier of Fortune is versatile and does not stand still, but it is never too late to start playing. The game, like many Shooter games has a full immersion in gaming. AllGame staff continues to play it.

Soldier of Fortune is perfect for playing alone or with friends.

At AllGame you can find reviews on Soldier of Fortune, gameplay videos, screenshots of the game and other Shooter representatives.

War accompanies man from the dawn of time. It is also an indispensable element of our times. Today's wars are permanent, not only when regular troops stand against each other. Every day, the conflicting interests of heads of state, large corporations, criminal organizations and terrorist groups clash around the world. The actors behind the scenes, usually anonymous, are mercenaries - highly qualified soldiers who often have the fate of the world in their hands. This is why they are often referred to as "Soldiers of Fortune."

Raven Software - known for such productions as "Heretic" and "Hexen" - apparently got bored of creating FPP games kept in a fantasy atmosphere. Released at the beginning of last year, "Soldier of Fortune" is about more mundane matters than casting spells and fighting the forces of darkness. In the game, we play the role of John Mullins, who works as a mercenary for the secret government organization "The Shop". Considering that our hero participates in operations aimed at maintaining peace all over the world, the name "Store" is extremely practical. Imagine a situation like this: "Mrs. Mullins, where does your husband work?", "In the shop", "And that's probably in the butcher's shop, because he always comes home with blood ...". Nothing more nothing less. And Mr. Mullins can feel safe, and so can we.

The game begins in the basement of the New York subway, where a local gang is holding a group of hostages, which we must, of course, free with the least possible loss of life. The point here is both to neutralize the enemies before they kill the detained (and us!), And to be careful yourself where you shoot. Of course, a bullet or two can get lost somewhere ... but no more! The action in the subway is only a prelude. It turns out that the local gang is not exactly local, as it is part of a large international terrorist group. As we add that this group has just stolen four nuclear warheads, we already know that it will not be boring.

The action of the game takes us to various places around the world. We will go to Japan, Iraq, Germany, Siberia, North Africa etc. The levels are superbly designed and we will have no doubts for a moment that we are where we should be. In Japan, we will feel the ubiquity of large corporations, in Germany we will move around an old castle, in Africa we will find ourselves in a huge slaughterhouse, where we will encounter hanging pieces of meat and pools of blood every now and then. What's more, we will even go to Kosovo, and it must be remembered that the game saw the light of day when the topic of the Kosovo conflict did not come off the headlines. It doesn't end there. Imagine the following situation: a night-time train filled with terrorists, an armed helicopter circling near it, and we have to get to the wagon at the other end of the train to find one of the warheads. I must admit that in terms of location, the authors of the game really did their best.

The first thing to mention is that John Mullins is not a figment of the lords of Raven, but a living man of flesh and blood. Moreover, one who was actually a mercenary and carried out missions in Europe, Africa, Afghanistan and many countries of the Middle East. As a consultant, he was always present in the implementation of the game and often his opinion had the final impact on what we can see as the end result of the developers' work. And those even went so far as to scan a picture of John Mullins and the virtual hero really resembles him.

Another thing that stands out is, of course, the weapons. In the game, most of the arsenal are weapons actually used in the modern world. It is true that the authors, for financial reasons, did not decide to buy the rights to use the original names, but everyone will quickly recognize the Desert Eagle 44, shotgun or MP5 rifle. In addition, there is a knife, Uzi with a silencer, sniper rifle, heavy machine gun, flamethrower, rocket launcher, as well as weapons that are invented by the authors from start to finish, such as a portable microwave, which turns our opponents into more or less baked steaks . Speaking of weapons - almost each of them has two modes of operation. For example, a rifle fires short or long bursts, and a flamethrower, apart from setting a cigarette on fire together with its owner, can also throw fire grenades. Yes, some weapons behave unrealistically, but the realism in the case of weapons is manifested not only in the fact that some of them resemble the truth of mercenary equipment. For example, we have to change the magazines ourselves, and when we hold the rocket launcher, the hero, feeling its weight, has to adjust its position on the shoulder every now and then. By the way, it should be mentioned that there is no other game in which the sniper mode has been solved so well. Even "No One Lives Forever", "Hitman" or "Project IGI", ie games that were created later than "Soldier of Fortune", cannot match the Raven product in this respect.

When writing about "Soldier of Fortune" it is impossible not to mention the GHOUL system. Anyone who has played "Unreal Torunament" knows perfectly well that shooting an opponent's head is a lot of "fun". The Lords of Raven have gone much further by creating a system that divides each character model from the game into 26 parts. Depending on which of them we shoot, we can expect a different reaction of the shot. If we hit the opponent in the foot, he will start jumping on the other, if we hit him in the knee - he starts limping, we hit him in the throat - he gasps at it, etc. It is also important what weapon we use. We shoot the opponent in the head with an ordinary 9 mm pistol - a small hole will be created, we shoot with a shotgun - well ... our opponent will be 20 cm shorter. And if we shoot a heavy machine gun at the legs at knee level or even better at thigh level ... Disgusting? Sure it's disgusting! Sick? And how! But let's face it: playable? Amazing! On top of this, there are statistics at the end of each mission, including summaries. Thanks to them, at the end of the game, I learned that as a mercenary I earned over $ 1 million and killed over 1,200 opponents, of which about 250 I ended up in such a place that if they survived, they would easily find a job in any harem. It is surprising that this game did not cause such a storm in the Western media, such as "Carmageddon" or "Kingpin".

In "Soldier of Fortune" we find numerous so-called "Flavors" that do not have a significant impact on the gameplay itself, but will certainly make the time spent with the Raven product more pleasant. Most of them are related to our opponents. And so, for example, we can see how they do their physiological functions or stretch while standing on watch. However, the most impressive thing is what we can do with a sniper rifle, which is by far the most practical weapon in the entire game. If we aim well, we are able to use it to knock the opponent's hat and even sunglasses off the head! And if we knock the gun out of his hand, his face begins to express fear, and he either crouches scared or runs away. Undoubtedly, these "flavors" include the fact that in Iraq we meet almost face to face with Saddam himself!

Unfortunately, the problem of Soldier of Fortune is what is the problem of most games - the terrible AI. Sometimes our enemies run into an obstacle and are unable to avoid it; when we kill one of the two guards, the other will not even notice it, etc. An interesting feature introduced by the authors is the possibility of leaning around the corner, but if we do it even 10 cm from the face of our opponent, he will not notice us anyway. This is practically the only but serious bug in this game.

"Soldier of Fortune" is based on the age-old, though heavily tuned engin "Quake`a 2". Despite the passage of time, the game looks very good and only true texture freaks under the sign of "Quake'a 3" may feel a bit unsatisfied. The sound is at a very high level. Character voices are well matched and weapons make realistic sounds. Music has never been Raven Software's forte, but in this case it is on a fairly decent level. The themes in Iraq and Africa in particular deserve recognition.

The advantages of the product include the fact that we have a lot of configuration options here. The game has high hardware requirements, but the amount of shadows and the quality of textures can be set in many ways. We also have a lot of freedom when choosing the level of difficulty. We can set the number of opponents, the number of allowed saves, whether we can wear any amount of equipment, or only with a specific weight. Also, the level of violence in the game can be defined by us.

The mulitplayer mode is quite well polished. It is true that this is a game made mainly for a single player, but it is always nice to face a live opponent. The gameplay is especially exciting when one player hunts the other and has to hide himself from the other.

As I mentioned, the only drawback of this game is the low AI of the opponents. However, this does not change the fact that the game has a unique gameplay. The stages are linear, but you still want to move forward. There is not a single stage here, not a single moment where we could get bored. If we decide that "Deus Ex" is a cRPG game, then we can undoubtedly say that "Soldier of Fortune" is the best FPP game of the last year.

Screenshots will help you evaluate the graphics and gameplay of Soldier of Fortune. 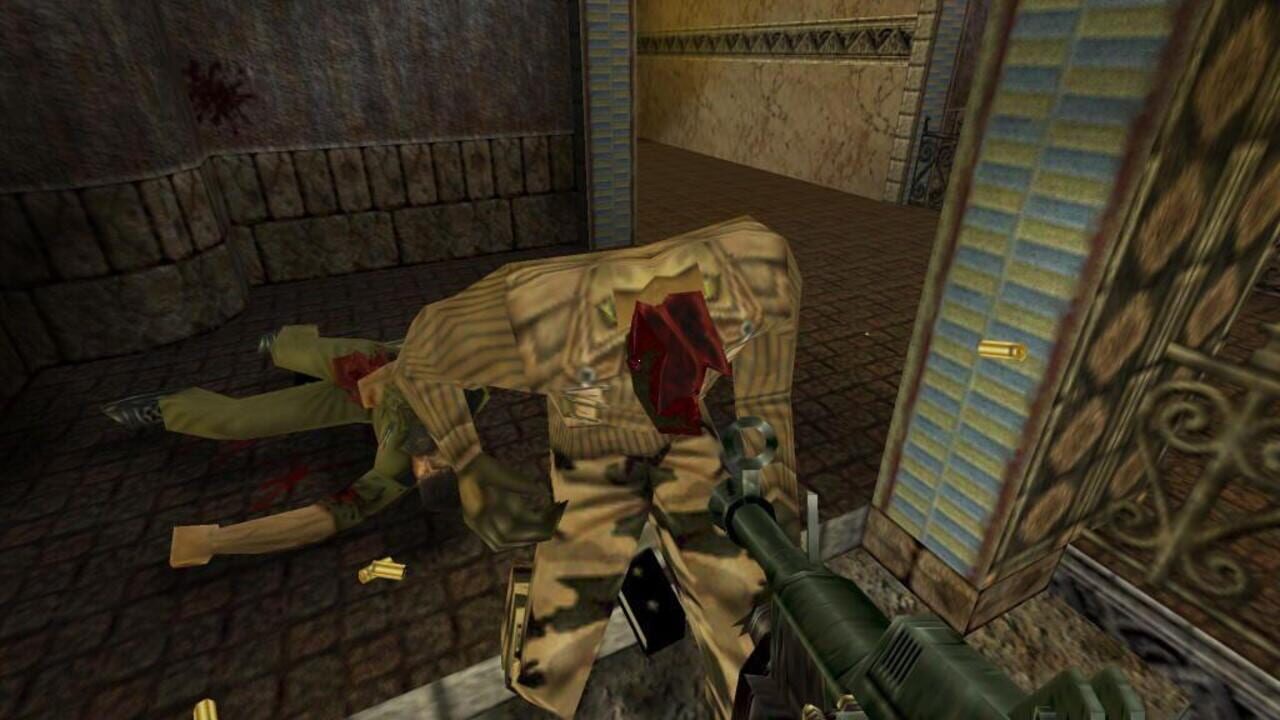 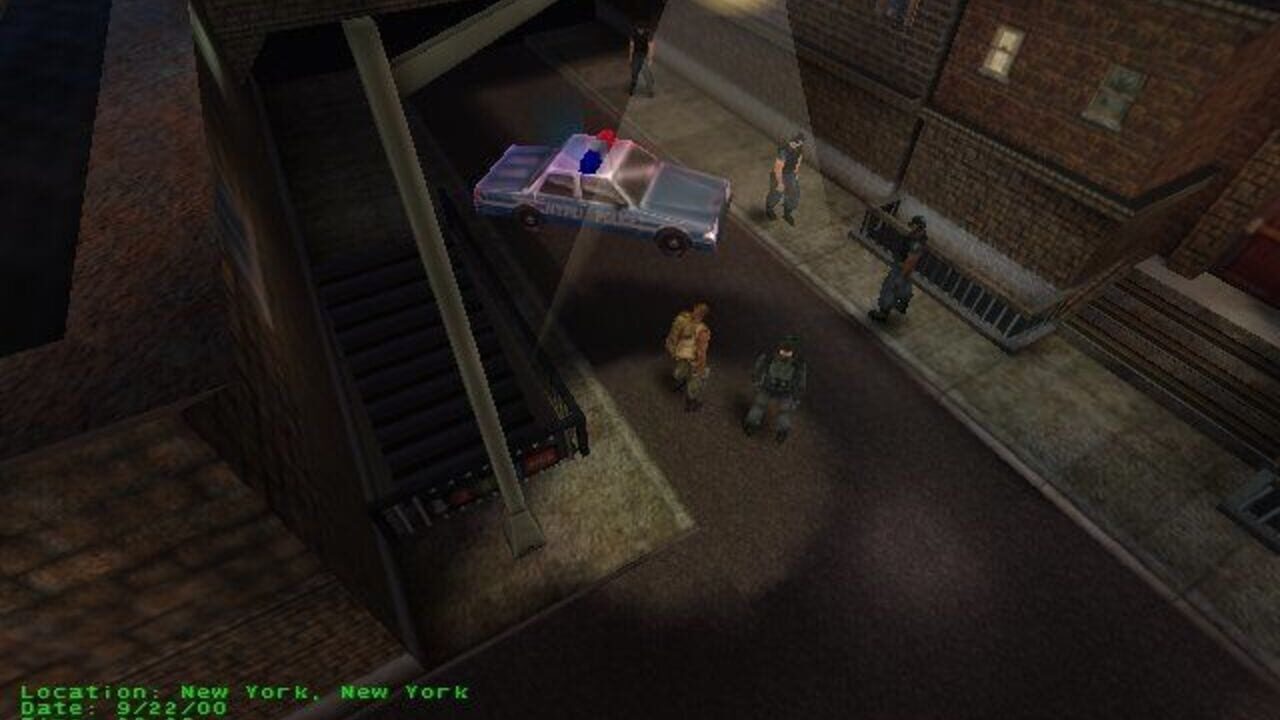 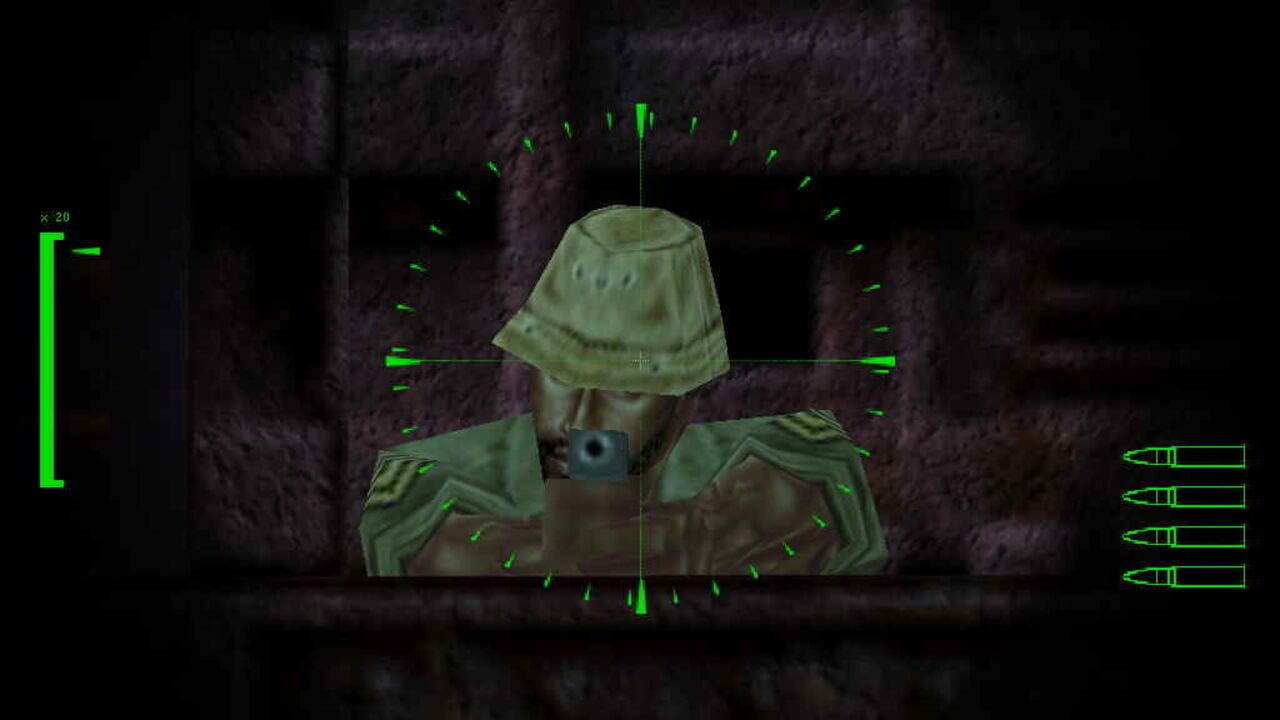 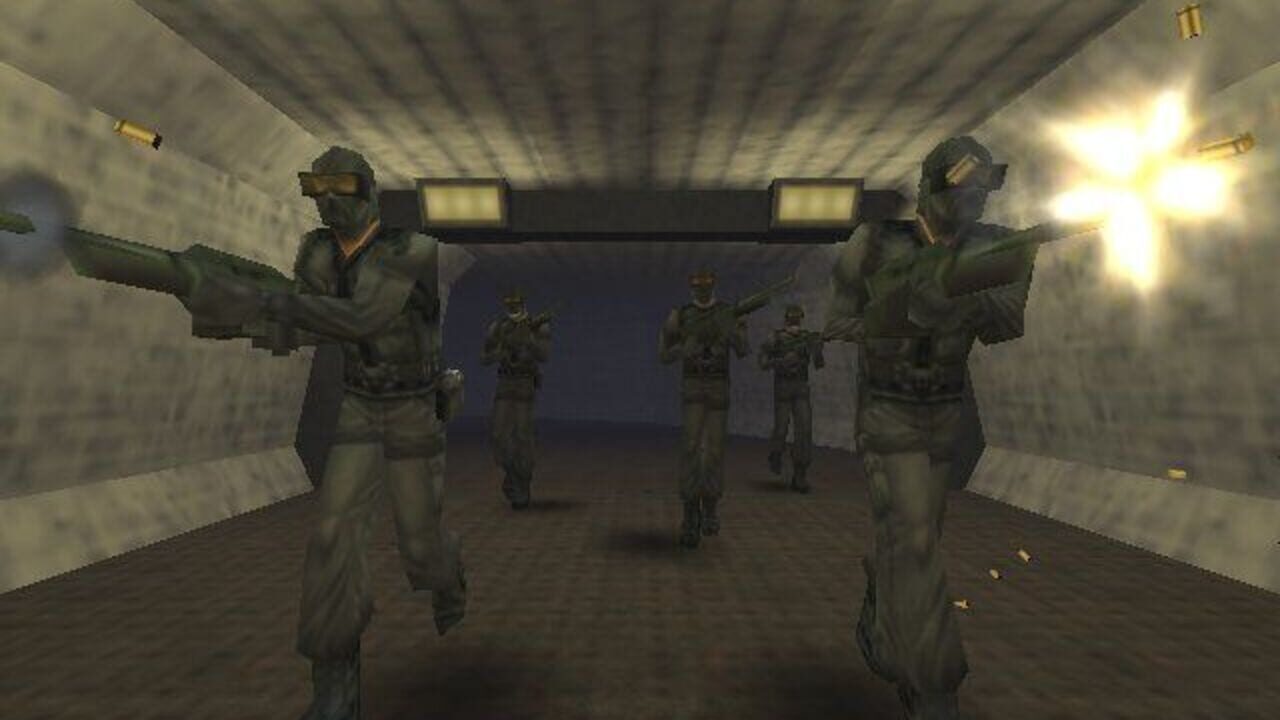 If you like Soldier of Fortune, but you're tired of it and want something new, you can try other games.