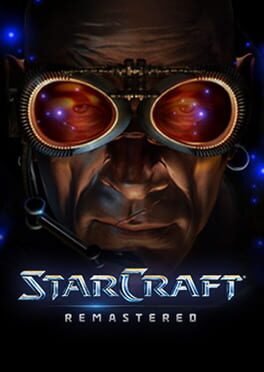 StarCraft: Remastered is a reverently crafted modernization of Blizzard Entertainment’s original sci-fi real-time strategy game. StarCraft: Remastered will offer a full graphical overhaul of the original StarCraft and the StarCraft: Brood War expansion, bringing a modern look and feel to the timeless classic with widescreen UHD support for up to 4K resolution. StarCraft: Remastered will include all of StarCraft’s and Brood War’s campaign missions with enhanced storytelling via new comic-book style interludes. While this rejuvenated version of StarCraft is locked and loaded for the modern era, the gameplay and balance have been precisely preserved, for an experience that will feel identical to veteran players. 4K Ultra HD Graphics and Upgraded Audio: StarCraft: Remastered will include high-resolution unit models, buildings, doodads, and tilesets, as well as high-fidelity music and sound effects to bring the original game into the modern era, while retaining the classic StarCraft style. Same Timeless Gameplay: The gameplay balance and idiosyncrasies have been painstakingly preserved from the original game. Mutalisk stacking, magic-boxing, unit pathfinding, control-group limitations, and more will all remain intact, allowing veteran players to enjoy playing and watching high-level competitive matches as before. Includes Original and Expansion Campaigns: Return to the planetary battlefields of the war-torn Koprulu Sector and command the forces of the terran, zerg, and protoss across more than 50 story-driven single-player missions. Fall in Love Again: Relive the epic saga of some of gaming’s most memorable and beloved heroes and villains, including Marshal Jim Raynor, Lieutenant Sarah Kerrigan, and Praetor Fenix. Enhanced Storytelling: Original cinematics will be improved to 1080p resolution, while mission interludes and introductions will feature new comic-book style illustrations. Blizzard’s Gaming Network Brings a Bevy of Features: In addition to accurate matchmaking and enhanced ladder functionality, players will also be able to stay in touch with and chat with friends playing other Blizzard games. The classic functionality of named custom games and custom game lobbies will be retained, for the familiarity of long-time StarCraft players. Localized in 13 Languages: English, German, French, Brazilian Portuguese, Spanish (LatAm), Spanish (European), Polish, Italian, Russian, Korean, Simplified Chinese, Traditional Chinese, and Japanese.

StarCraft: Remastered is versatile and does not stand still, but it is never too late to start playing. The game, like many Real Time Strategy (RTS) games has a full immersion in gaming. AllGame staff continues to play it.

StarCraft: Remastered is perfect for playing alone or with friends.

At AllGame you can find reviews on StarCraft: Remastered, gameplay videos, screenshots of the game and other Real Time Strategy (RTS) representatives.

Author: Claudio Chianese
Date: 2020-07-31 00:39:32
When a medium of communication begins to look back, then it is a sign that it has reached a certain maturity. After an era of leaps forward, new concepts, new graphics engines, unprecedented features, video games have started to take a breath and reflect on the good old days. And it&#39;s not just about retrogaming, or all those titles that propose themselves as modern heirs of a certain tradition, be it isometric role-playing games or wild doom shooters at Doom: the most faithful tribute to the past is represented by remastered editions of the masterpieces of the past decades.

In fact, this StarCraft Remastered is in good company: among the recently revived old glories include titles of the caliber of Baldur's Gate, Planescape: Torment, Age of Empires, Homeworld. But allow me a confession: however interesting the phenomenon is, and I am pleased to be able to launch a classic on modern operating systems, such operations have never exalted me much. Maybe because I am a gaming optimist, firmly convinced that our hobby has improved a lot over the years, and that the best is yet to come. Or maybe because, after all, I remained the boy of the time, and I continue to prefer the joy for a new toy to the nostalgic glitters aroused by the memory of the old ones.

No more psychology, though: StarCraft is StarCraft, and the definition of "old game" is close to him. Not so much for the mechanics themselves, which still betray a certain age, but for the enormous popularity with which it continues to enjoy among fans. Especially in South Korea, where national sport is practically. A prestigious position that not even the StarCraft II trilogy managed to completely subvert. This is because the progenitor has some peculiar characteristics of playability, a little wanted and a little dictated by the limitations of the time, which make it a real test for those who want to approach competitive gaming.

Here, know that all these features are still there. Since the announcement of the Remastered version, Blizzard has promised that it would not affect the original mechanics. And in fact here we come back bizarre as the limit to the contemporary selection of the units, a real tribute to the most meticulous micro-management, and the age-old problems of pathfinding, now risen to the rank of features. Let's face it: net of the graphics, there is practically no difference between the original StarCraft and this high-tech clone.

Just as medieval copyists reproduced books, almost sacred objects beyond the fact that they were actually read or not, Blizzard did a painstaking job, an even more significant feat if we consider that it was necessary to rewrite much of the code, being the original one is more available. It could not be otherwise, because StarCraft Remastered refers to a particular type of player.

Indeed, two: eSport enthusiasts reluctant to abandon, both as athletes and spectators, the discipline on which they were trained, and the somewhat grumpy traditionalists, who did not like the wide-ranging innovations of StarCraft II. Don't expect the comforts of modern times: no automatic skills, therefore, limited production queues and the absolute need for hotkeys to control troops on the field. The experience is the frenetic one, with a high rate of action per minute, that those who have attended the tournaments know well.

In this sense, StarCraft Remastered is a perfect center, to the point that it is not necessary to spend big talk about it: the original game was a masterpiece, and it remained identical to itself. Let's try to adopt, however, the perspective of those who have not spent the last twenty years eating bread and Blizzard. The package contains the original title and the Brood Wars expansion, for a total of six campaigns and fifty missions (about two thirds of what is offered by the StarCraft II trilogy). We are talking about old-fashioned campaigns, to be tackled in succession without particular links between one mission and another. There are no permanent upgrades, no role elements, and the design itself is far from the variety of the successor.

If the mechanics are certainly poorer, the narrative remains, in my opinion, superior. A classic space opera, studded with frankly epic moments, where the second part of the saga turns too much in the direction of science-fantasy, with mystical drifts that it would have been better to leave to WarCraft. If you do not know the story, here it is already worth the fifteen euros of the ticket, especially now that it is embellished with graphic interludes designed with great skill.

The gameplay itself may not be easy to digest for those accustomed to modern RTS. Certain limitations are, as we said, anachronistic, and if you want to prepare properly for multiplayer you need to set the speed to the highest levels. In short, you have to click, click a lot and click fast, a frenetic trend that the genre, as a whole, has tried to shake off. The three races, on the other hand, work as well as ever. The Zerg insectoids attack en masse, the Terrans rely on mobility and an economic but powerful infantry, and the Protoss, with their elite troops, favor micro-management. Same thing goes for the now consolidated synergy between resource gathering and military tactics. On the bottom, the qualities that made StarCraft great at the time continue to shine.

As for the graphics, the improvement is evident. Not only the widescreen support, absolutely necessary, but also the portraits and models of the units, detailed and pleasant to look at. Mind you, the style is not at all modern: rather, the impression is that of sprites drawn and colored by hand, almost handcrafted. Of course, for those who were too young at the time of the original StarCraft, the remastered edition represents the best option.

In official terms, at least. Yes, because there is a full-bodied mod, called Mass Recall, which uses the StarCraft II engine to reproduce the StarCraft and Brood War campaigns. I tried it, and I must say that it is really well made, both from the point of view of the atmosphere and from that of the mechanics. In fact, if you allow me heresy, I confess that I had more fun replaying the classic campaigns in Mass Recall than in this official version of the Blizzard house: as far as I'm concerned, the supporting structure of StarCraft II is far better . In short, if you are interested only in the single player, remember to consider this amateur alternative. The multiplayer deserves a separate discussion, which we refer to the verdict.

MODUS OPERANDI
I played StarCraft Remastered thanks to a Battle.net code kindly provided by Blizzard, first by testing the multiplayer beta and then facing the single player campaigns. Predictably, no fluidity problem on a machine equipped with i5 4670k, 16 GB of RAM and GTX 1070. The Italian translation is excellent, extended to texts and voices.

Screenshots will help you evaluate the graphics and gameplay of StarCraft: Remastered. 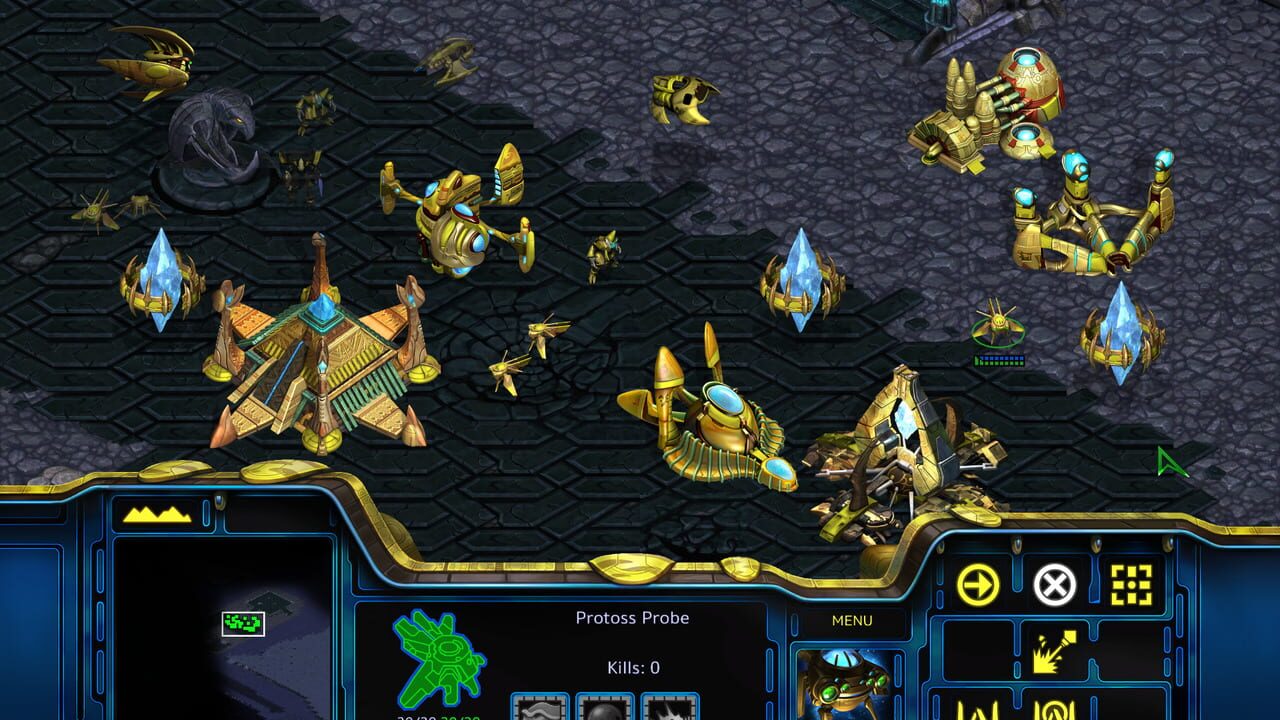 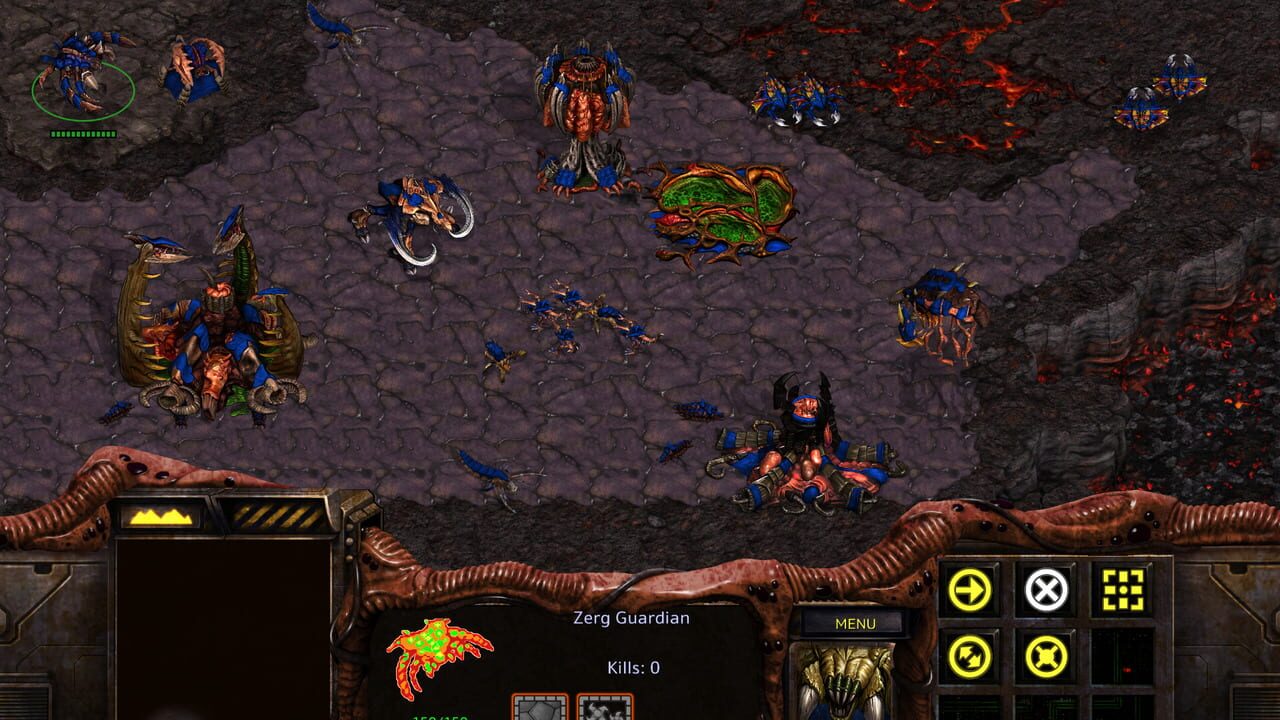 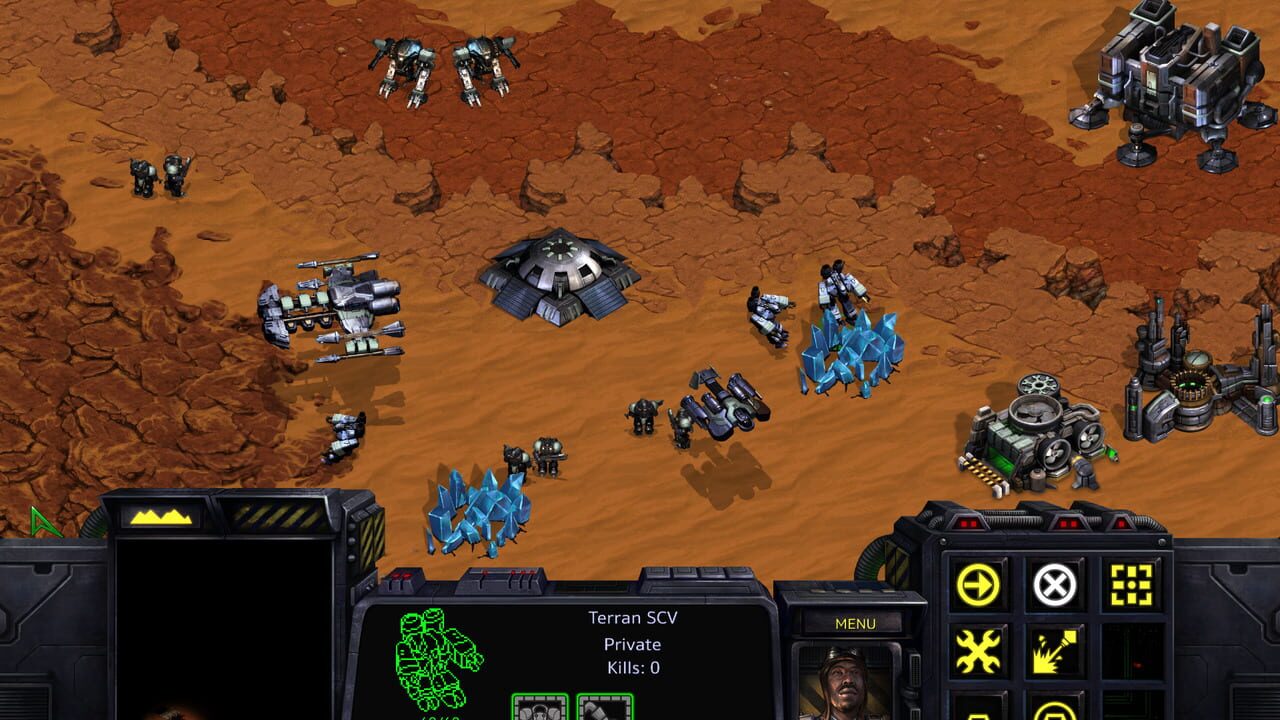 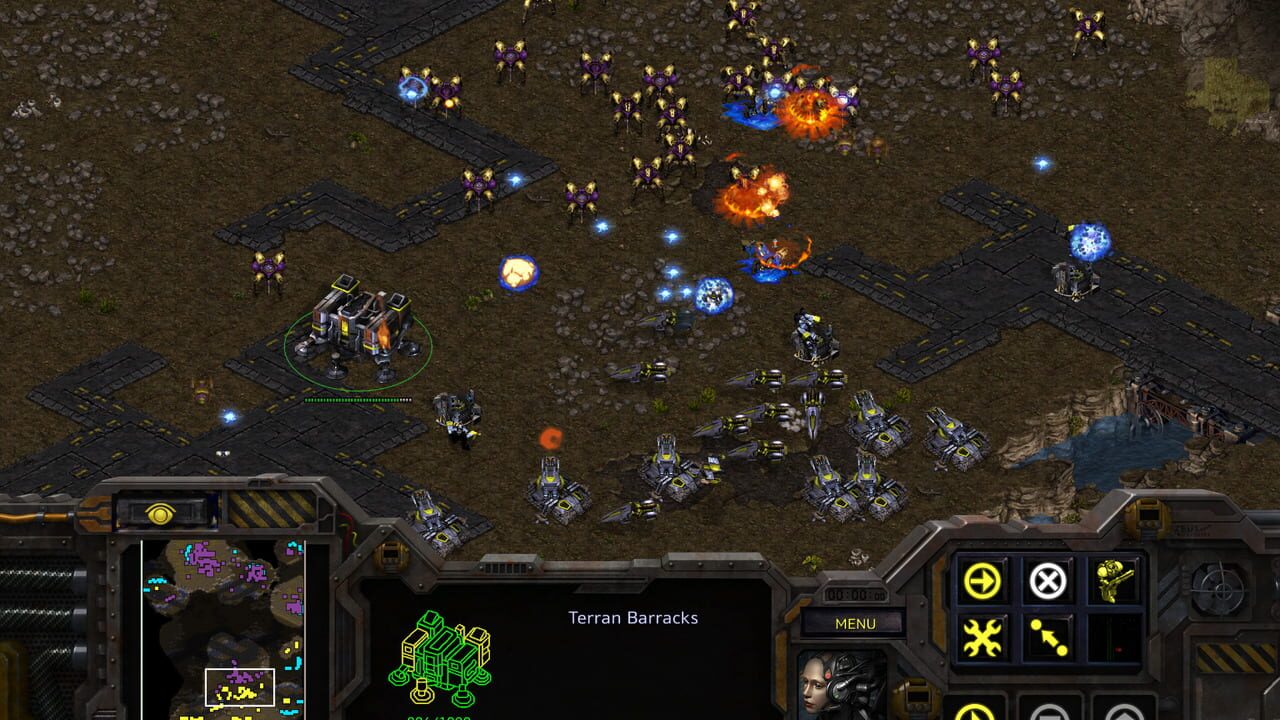 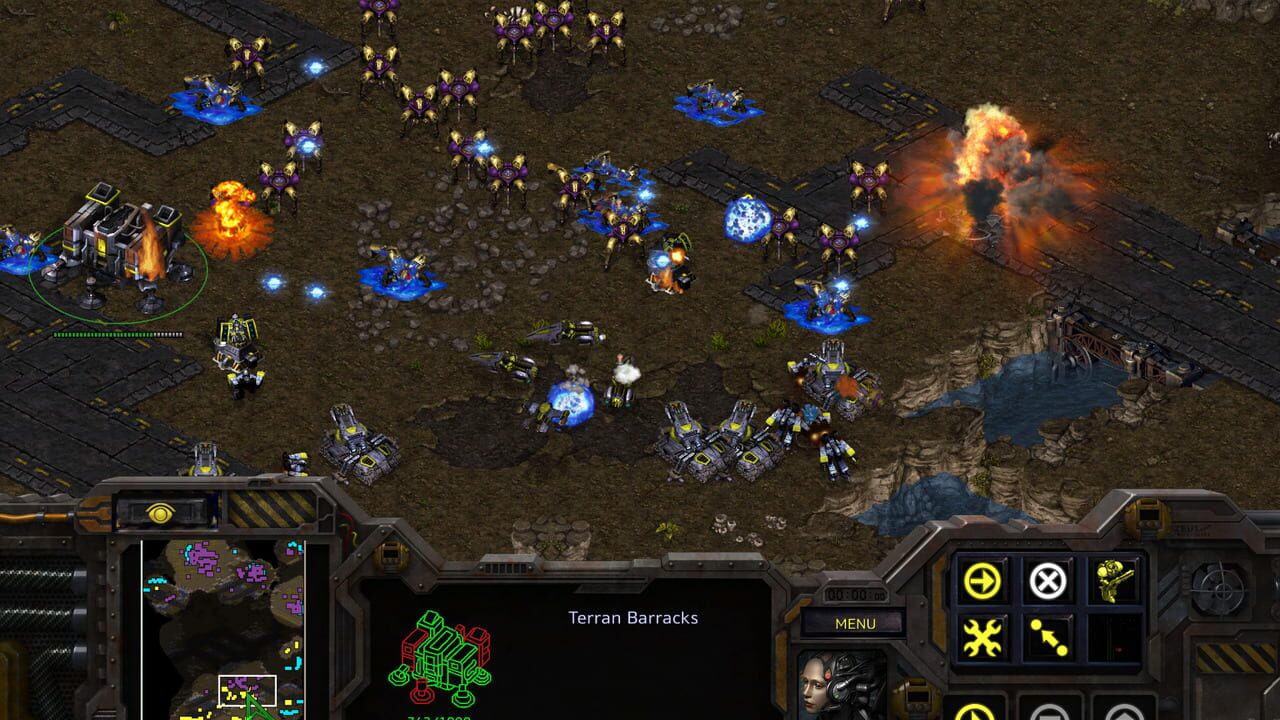 If you like StarCraft: Remastered, but you're tired of it and want something new, you can try other games.