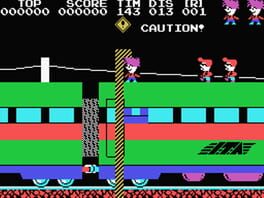 The ITA Express train has been hijacked and, as a special agent, you have been sent to recapture and stop the train. Fight the knife-throwing bandits, avoid the alien birds and find the key - but beware of the low bridges. Good Luck!

About Stop the Express

In addition to Stop the Express, the representatives of Platform games also belong:

Stop the Express is versatile and does not stand still, but it is never too late to start playing. The game, like many Platform games has a full immersion in gaming. AllGame staff continues to play it.

Stop the Express is perfect for playing alone or with friends.

At AllGame you can find reviews on Stop the Express, gameplay videos, screenshots of the game and other Platform representatives.

If you like Stop the Express, but you're tired of it and want something new, you can try other games.