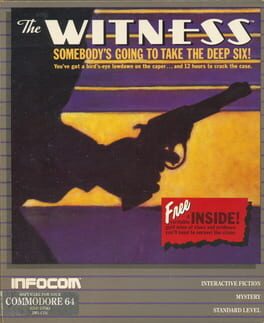 You wake up ... alone ... on an unusual island brimming with puzzles that will challenge and shock you, you can't recollect what your identity is or how you arrived. Be that as it may, there is one thing you can do: You can investigate the island, wanting to discover pieces of information, recapture your memory, and by one way or another discover a way home. "The Witness" is a solitary player game in an open world with many areas, to investigate and with more than 500 riddles. This game regards you as a smart player and treats your time as something valuable. Nothing fills in as filler. Each puzzle carries another and one of a kind plan to the blend. What you get is a game brimming with thoughts.

The Witness is released by Infocom in 31 Dec 1983. The game is designed by Infocom. The Witness is a typical representative of the Adventure genre. Playing The Witness is a pleasure. It does not matter whether it is the first or a millionth hour in Adventure, there will always be room for something new and interesting. Thrilling levels and gameplay The Witness will not leave anyone indifferent. The complexity of gameplay increases with each new level and does not let any player get bored.

In addition to The Witness, the representatives of Adventure games also belong:

The Witness is versatile and does not stand still, but it is never too late to start playing. The game, like many Adventure games has a full immersion in gaming. AllGame staff continues to play it.

The Witness is perfect for playing alone or with friends.

At AllGame you can find reviews on The Witness, gameplay videos, screenshots of the game and other Adventure representatives.

The Witness is a game overflowing with secrets: complex and imposing mysteries, infiltrating my subconscious, tracing tortuous paths in my brain until I literally see only these labyrinths every time I close my eyes . This is the kind of intensity that The Witness has. He stuck me with his masterfully designed puzzles and his magnificent visuals, pushed me forward as I shaped my own role on the island. Freedom allowed by a world as warmly open to exploration as pleasantly difficult to understand.

The Witness is an entirely 3D world that we travel in the first person, but which focuses on the idea of solving 2D puzzles that we find on the panels in the game. We complete these by drawing the right path from one point to another. This basic, simple and intuitive concept is at the heart of around 700 puzzles spread over this enigmatic island.

Line drawing is really very easy, both with the mouse and with the gamepad, and comes with a slight electric buzz. The pleasure of interacting in a purely tactile way with these interfaces, and the feeling of wonder and initial mystery that their presence brings were enough to motivate me from the start of The Witness. But these labyrinths of light quickly became more sophisticated, adding rules and constraints to a rather simple structure, allowing harder but more rewarding challenges to emerge.

Puzzles with a goal

As I learned each new rule, curiosity quickly gave way to an obsession with the objectives to be achieved. I didn't just solve puzzles just because they were fun: slowly but surely, they were starting to make sense in a much larger context. This was manifested in one of The Witness’s first goals: to shoot rays of light towards a mountain. This mountain is the highest point of the island, the most imposing monument, and consequently the most central mystery for obvious reasons as soon as we start to play, but which I will not reveal here.

Most of the main regions of the island host machines capable of projecting rays of light onto the mountain, but they can only be activated once the puzzles have been solved in a certain order, according to my frantic desire to draw lines. a significant feeling of progression. It also helped me to see the different regions of the island as part of a bigger and more coherent whole. Traveling around this surprisingly vast island and across its rich land seemed to me less tiresome. The island left me the opportunity to set my own goals, to chart my own path, allowing me to never have the feeling of being lost, both physically and in relation to my role in these places.

There was also enough to see and do beyond the main goals to keep my time wandering captivating, minute by minute. I could take a peaceful boat trip around the island, explore the ruins of a ship, and finally descend into one of the underground passages that I had discovered on a previous trip. I enjoyed these quiet moments as much as those spent overcoming these confusing puzzles, and especially when I got stuck.

The enigmas of The Witness are difficult, but always balanced. In a freer way than in most puzzling adventures, you have the opportunity, and are even encouraged, to turn your back on a problem you don't think you can solve. It is a concept presented from the first minutes, when you meet a door marked with symbols with which you are not at all familiar. The answers you need are further down the road, but you must first agree to leave this riddle aside. The Witness does more than provide you with the tools you need to find the right answers: it teaches you how to ask the right questions.

Extend this dynamic to the entire island, and you get a cleverly designed puzzle game that not only gives you the opportunity to nibble on your puzzles at your own pace, but also keeps you going through its learning process. in himself. The Witness’s master conundrum design is at the level of the architecture of the island itself.

One of the first sequences of puzzles allows you to unlock a small courtyard filled with drawings of human hearts and veins. It didn't seem to matter when I found it, until I came to a cliff next door. It took me a while to realize the resemblance of the red roots of trees with thick arteries running through the flesh of the earth. These visual revelations, amazing and sometimes enlightening, were everywhere, adding excitement and meaning to this universe even when I wasn't looking for anything specific.

Each tree, each stone, seems to have been placed in a place for a specific purpose, giving familiar landscapes thematic value when viewed from another point of view. Ordinary landmarks became specific points of interest by looking at them through a grove of trees, or perfectly centered in a window frame. This is one of The Witness’s goals: to get you to see things differently.

Many times finding the answer to a puzzle meant stepping back and wondering what I couldn't see. The puzzles in The Witness are solved on their panels, but that doesn't mean that everything you need is on it. Whatever question a particular puzzle posed, I always felt that finding the answer was as satisfying as being successful.

The island of enlightenment

Many games try to talk about things, but The Witness embodies these things. Hidden audio messages on the island offer quotes from famous philosophers and scientists, chosen with particular attention to address the concepts that The Witness wants to explore. The graceful design of the island already succeeds in provoking reflection on some of the ideas mentioned in the quotations, sometimes making the latter redundant. But at other times, the words touched me in the same way as the island did, inviting me to see things from an angle that I would not necessarily have imagined.

A special quote, at the top of the mountain, comes from former astronaut Russell Schweickart. As I looked at the island from the top, I felt a connection with what Schweickart was describing. He was talking about the impact of seeing Earth from space, and I found a similarity to the overall view of the island that I could have from the top of the mountain. Like the Earth that Schweickart described, turning the same way every day, revealing the same places on each rotation, nothing about the island really changes. I could pass close to the same place ninety-nine times in The Witness without having any particular feeling ... But, at the hundredth time, to realize something new. Not because the place has changed, but because I have changed.

Like everything else in The Witness, finding concrete answers about this abandoned island and the people who once inhabited it takes patience. There is a lot to dissect, statues resembling frozen people from different eras, mysterious company logos, hidden audio messages. All of that was enough to keep me enthralled by the mysteries set in place during the 40 to 50 hours it took me to finish the game. The questions outnumber the answers, and I appreciated the fact that leave the door open to the imagination.

There are also a lot of things you can miss, like secrets hidden behind some of the most complicated puzzles in the game. But the most breathtaking revelations hid in plain sight, making each return to the island a new adventure. I estimate that it would take between 80 and 100 hours to see and do everything The Witness offers. But I got enough thematic content and contextual clues to get to the end of the game without feeling like The Witness owed me a lot more answers to his puzzles. History does not direct The Witness as much as its mysteries, any more than it views history as a reward for your efforts. What it brings only enriches an already very rewarding experience.

If screenshots are not enough, you can enjoy creative videos from Infocom

If you like The Witness, but you're tired of it and want something new, you can try other games.